Auditions for A Streetcar Named Desire, by Tennessee Williams
Directed by Olin Meadows

Special Notes:
AUDITIONS WILL BE HELD BY COLD READS FROM THE SCRIPT.
It is imperative that you have either read or are VERY familiar with A Streetcar Named Desire in preparation for this audition. The play is realistic but requires size and ability to deal with heightened language
THERE WILL BE NO WALK UP AUDITIONS ALLOWED! AUDITIONERS MUST MAKE APPOINTMENT. 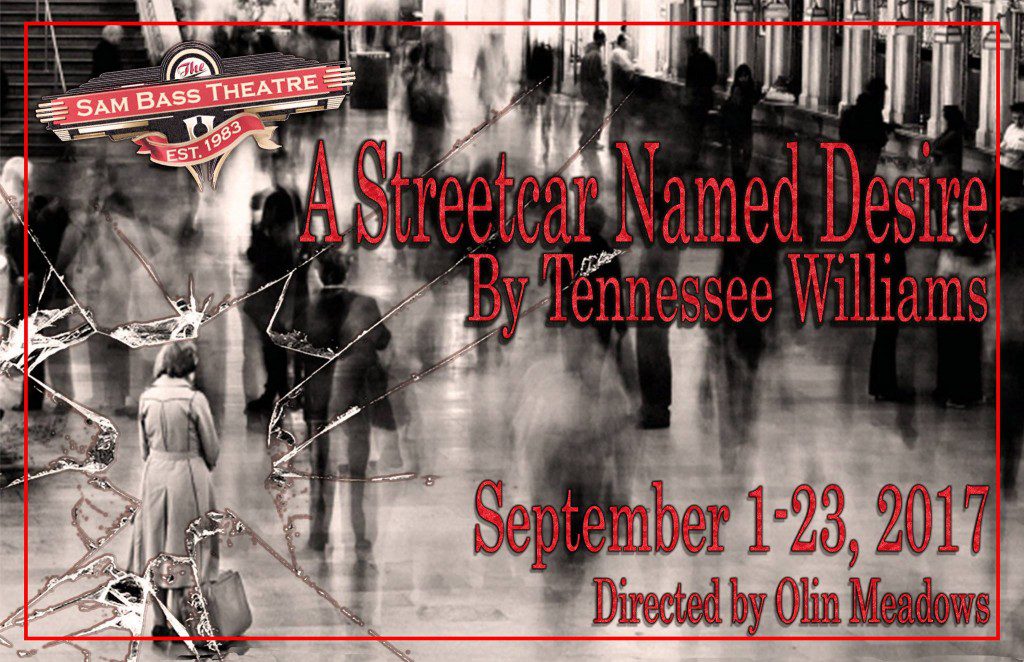 SYNOPSIS: The play reveals to the very depths the character of Blanche duBois, a woman whose life has been undermined by her romantic illusions, which lead her to reject—so far as possible—the realities of life with which she is faced and which she consistently ignores. The pressure brought to bear upon her by her sister, with whom she goes to live in New Orleans, intensified by the earthy and extremely “normal” young husband of the latter, leads to a revelation of her tragic self-delusion and, in the end, to madness.
This Production will feature usage of multimedia projections as well as some moments of brief and partial nudity. The focus of this production will be on the sources leading to Blanche DuBois’s demise and the relationships between the three main characters. This production is a re-imagined backstory for all of the characters involved without changing the text. Giving a new and insightful look at the things that shape our psyche.
Character Breakdowns: (All Roles Available – Color Blind Casting All Ethnicities Encouraged to Audition. Ages listed represent the age of the characters not necessarily the actor. The age and physical requirements listed for each character are a guide and are not necessarily final casting requirements. All those cast must be at least 18.

Make sure to READ THE PLAY or at the very least be familiar with it!
Be prepared to answer questions about the play or about why you would like to play the character you are interested in. Again it is very important you are familiar with the show.
You must have any and all unavoidable conflicts with the rehearsal schedule listed on your audition form.
Sides for most characters will be available online at www.sambasstheatre.org/auditions
Performance Dates: September 1,2,3,7,8,9,10,14,15,16,17,21,22,23

City or Location of call: AUSTIN, TX / ROUND ROCK
Please submit to: artisticdirector@sambasstheatre.org by 2017-05-30

This casting notice was posted by: Sam Bass Theatre