All 4 actors must be able to move quickly, bring scenery on and off stage, fall down, climb through windows, etc. It’s a fast-paced, physical show.

Richard Hannay (age range 18-50)
One minute he’s bored and killing time at a music hall…the next thing he knows, he’s on the run for a murder he didn’t commit and mixed up with a mysterious organization called The 39 Steps. This character has several kissing scenes and will have either a real or fake pencil thin moustache.

Annabella/Margaret/Pamela (age range 18-45)
This female actor plays 3 different characters and has several kissing scenes. Annabella is a spy who has a murder/death scene; Margaret is a shy Scottish lass; and Pamela is a woman who meets Hannay on a train and eventually ends up handcuffed to him.

The Clowns (age range 18-50)
Two male actors are referred to as Clown 1 and Clown 2. In actuality, they play dozens of roles…..some lasting for seconds, some for a scene or two. They play men and they play women, by quickly adding hats, shawls, etc. They assist with many of the sight gags. 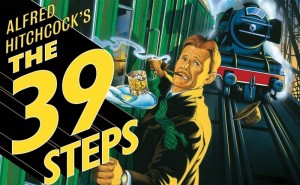 City or Location of call: Fernandina Beach, FL
Please submit to: twade@ameliacommunitytheatre.org by 2017-07-23

This casting notice was posted by: Amelia Community Theatre