Do you know the Worst Cook in America?

If so, The new season of the reality TV cooking show “Worst Cooks in America” wants to hear all about it. Do you know someone who struggles to make toast, scramble an egg or cook some simple pasta? Here is an opportunity to nominate someone you know, or yourself, to be crowned the “Worst Cook in America” and possibly have that person win $25k for their poor cooking skills.

Reality TV show, ‘The Worst Cooks in America‘ is casting the 2018 / 2019 season of the Food Network cooking competition. Food Network is searching the nation for the most disastrous home cooks in the USA in order to put them through a culinary bootcamp on the reality cooking show.

Chefs ANNE BURRELL and TYLER FLORENCE are coming back with a new team of culinary challenged competitors and a chance to turn those food disasters around and hopefully get them on their way to cooking an edible dish. 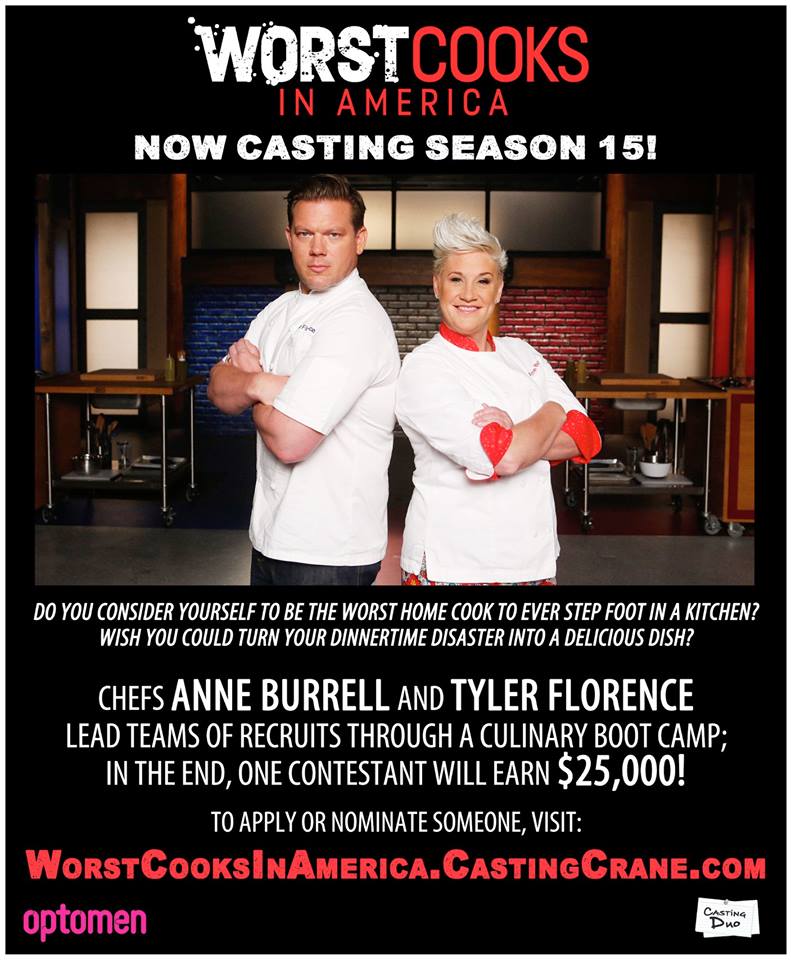 The competition will be fierce as the Worst Cooks in America try to make an edible meal in an attempt to cook their way to the end of the competition and win the cash prize. Have you always wanted to turn your usual sad meals into culinary triumphs? This may be the pair of chefs who can help you do just that and maybe even win $25,000 on the show.

Do you consider yourself to be the worst home cook to ever step foot in a kitchen? Wish you could turn your dinnertime disaster into a delicious dish?

Chefs ANNE BURRELL and TYLER FLORENCE lead teams of recruits through a culinary Boot Camp; in the end, one contestant will earn $25,000!

Completed applications and video submissions must be received by Monday, July 2, 2018 at 12pm PST* to be considered, BUT REMEMBER, THE SOONER THE BETTER!

Have you always dreamt of being able to cook elaborate meals for your family and friends? Worst Cooks in America is back and casting NATIONWIDE for season 15! If you think YOU are the worst cook in America, apply now at WorstCooksInAmerica.castingcrane.com for your chance to win $25k!