A short dance combination will be taught; please wear appropriate attire and shoes. Dance experience is not required to audition. Sides from the show will be provided. Please be prepared to stay for the entirety of the night. No appointment necessary. Non-union, NO PAY.

All are welcome to audition no matter what age, gender, or ethnicity. 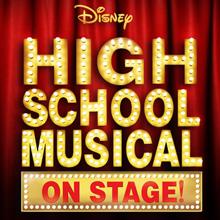 Disney Channel’s smash hit movie musical comes to life at Conejo Players Theatre in Disney’s High School Musical! Troy, Gabriella, and the students of East High must deal with issues of first love, friends, and family while balancing their classes and extracurricular activities.
It’s the first day after winter break at East High. The Jocks, Brainiacs, Thespians, and Skater Dudes find their cliques, recount their vacations, and look forward to the new year. Basketball team captain and resident jock Troy discovers that the brainy Gabriella, a girl he met singing karaoke on his ski trip, has just enrolled at East High. They cause an upheaval when they decide to audition for the high school musical, led by Ms. Darbus. Although many students resent the threat posed to the “status quo,” Troy and Gabriella’s alliance might just open the door for others to shine as well.
Cast of Characters:
Troy Bolton — The most popular kid at East High, Troy’s athletic, attractive, and a true leader. He’s the star of the basketball team who yearns to be more than what people want him to be. Eventually, he discovers his love for music but refuses to admit it. He also becomes smitten with Gabriella. Gender: Male. Age: to play 15.

Chad Danforth — Troy’s best friend. A star basketball player, part of the jocks, and second in command. Extremely focused on winning his school’s basketball championship, but is slowly understanding that there might be more to this world, including his sparring crush on Taylor. Gender: Male. Age: to play 15.

Zeke Baylor — A basketball player on the Wildcats team. Energetic and charismatic. He has two secrets: a crush on Sharpay and a love for baking, which he is happy and relieved to eventually reveal. Gender: Male. Age: to play 15.

Sharpay Evans — The egocentric diva star of the school musicals, she is Ryan’s older twin and the alpha dog. She thinks being the musical star defines her and clutches the title like her life depends on it, no matter what the cost to others. Gender: Female. Age: to play 15.

Ryan Evans — Sharpay’s fraternal twin and a self-delusional “star in the making.” He typically feels the brunt of Sharpay’s attacks and lives under her shadow. Although he possesses a diva exterior, he yearns to change. Gender: Male. Age: to play 15.

Taylor Mckessie — The competitive head “Brainiac” of the school and President of the Science Club. She convinces Gabriella to join the Science Decathlon team. Taylor has a soft spot for Chad, which she hides. Gender: Female. Age: to play 15.

Jack Scott — The resident P.A. Announcer for the high school. He is shy and insecure in front of the rest of the kids, but smooth and confident at the mic. Known as the “Velvet Fog of East High.” Gender: Male. Age: to play 15.

Kelsi Nielsen — The drama club’s rehearsal pianist and student composer extraordinaire, who is having her musical produced at school. Underneath her shy demeanor, Kelsi is an outspoken firecracker. Gender: Female. Age: to play 15.

Ms. Darbus — The kooky, eccentric Drama Club teacher. She has her self-absorbed moments but is still devoted to her students and constantly encourages them. Passionate about the art of theatre. Gender: Female. Age: 35 to 55.

Coach Bolton — The stern basketball coach and Troy’s dad. He lost the big game years ago and wants his son to succeed where he failed. Blinded by his ambition for his son, he is still a good guy and proud father. Gender: Male. Age: 40 to 45.