Peter and the Starcatcher

Peter and the Starcatcher provides a humorous and fantastical back story for the beloved character of Peter Pan and his arch-nemesis Captain Hook.
In this wickedly imaginative play, we meet a poor orphaned child on the high seas simply called Boy because, in the absence of a mother and a father, he was never given a name. His sad and lonely world is turned upside down when he meets Molly. The daughter of famous Starcatcher, Lord Astor, our heroine is on a mission to save the world and protect a treasure trunk filled with magical star stuff from getting into the hands of evil and greedy pirate Black Stache. As they travel aboard the Neverland ship headed for a faraway land, Molly and Boy learn about love, friendship and forge an unbreakable bond.

CAST OF CHARACTERS
Note: Gender blind casting: All characters, with the exception of Molly and Black Stache, will be cast without regard to gender.

THE ORPHANS
BOY (PETER): The hero Peter Pan, who earns his name during the course of the play. At the start, he is nameless, homeless, and friendless. He is a survivor. All he wants is a home and a family.
PRENTISS: Peter’s friend from the orphanage. He longs to be a leader, but doesn’t have the skills to do so.
TED: Another of Peter’s friends from the orphanage, Ted is obsessed with food. He is often called “Tubby” by Prentiss.

THE BRITISH SUBJECTS
LORD LEONARD ASTER: Molly’s father and a loyal subject to the Queen of England. He is a Starcatcher— a protector of powerful star stuff.
MOLLY ASTER: Lord Aster’s daughter and a true leader. She is an apprentice Starcatcher.
MRS. BUMBRAKE: Molly’s nanny.
CAPTAIN ROBERT FALCON SCOTT: Captain of the Wasp.
GREMPKIN: The mean schoolmaster of St. Norbert’s Orphanage for Lost Boys, where Boy, Prentiss, and Ted lived as orphans.

THE SEAFARERS
BILL SLANK: The Neverland’s vicious captain.
ALF: An old sailor and love interest of Mrs. Bumbrake.
MACK: An incompetent sailor who wants to be anywhere but under the thumb of Bill Slank.
BLACK STACHE: The world’s most feared pirate. He and his crew take over the Wasp. Black Stache is searching for a hero worthy of opposing his villainy.
SMEE: First mate to Black Stache. Single-mindedly dedicated to his captain’s every whim.
SÁNCHEZ: A hardworking Spanish pirate.

THE ISLANDERS
FIGHTING PRAWN: King of Mollusk Island. He has vowed to kill any Englishman that visits his kingdom.
HAWKING CLAM: Son of Fighting Prawn and Sweet’n Sour Shrimp.
TEACHER: Formerly a salmon, now a wise mermaid whom Boy meets on Mollusk Island. 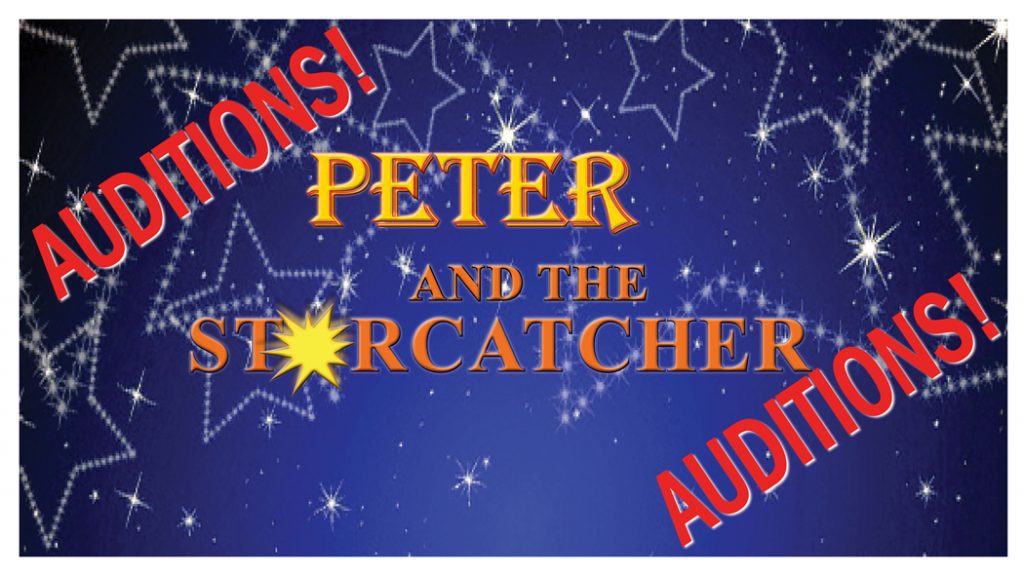 AUDITIONS:
Audition Sign-up page: https://www.shoreline.edu/theater/auditions/default.aspx
Monday, Oct 1 and Tuesday, Oct 2 from 12:30-3PM
Prepare a 1-2 minute monologue. You will be asked to sing something short and simple of our choosing.
All auditions and performances will take place in the Shoreline Campus Theater, 1600 Building, 16101 Greenwood Avenue North, Shoreline, WA 98133

To sign up:
Fill out the online form and select your preferred date and time from the options provided.
Prepare a 1-2 minute monologue. You will be asked to sing something short and simple of our choosing.

City or Location of call: Shoreline, WA
Please submit to: anita.proudfoot@go.shoreline.edu by 2018-08-31

This casting notice was posted by: Anita Proudfoot