Audition for A Raisin in The Sun

THEATER TO GO will be holding auditions for their upcoming production of A RAISIN IN THE SUN, by Lorraine Hansberry to be produced at Kelsey Theatre October 19-28 2018 at Kelsey Theatre in West Windsor NJ.
Seeking 8 African American actors and 1 Caucasian actor

All roles are Non-Equity, unpaid 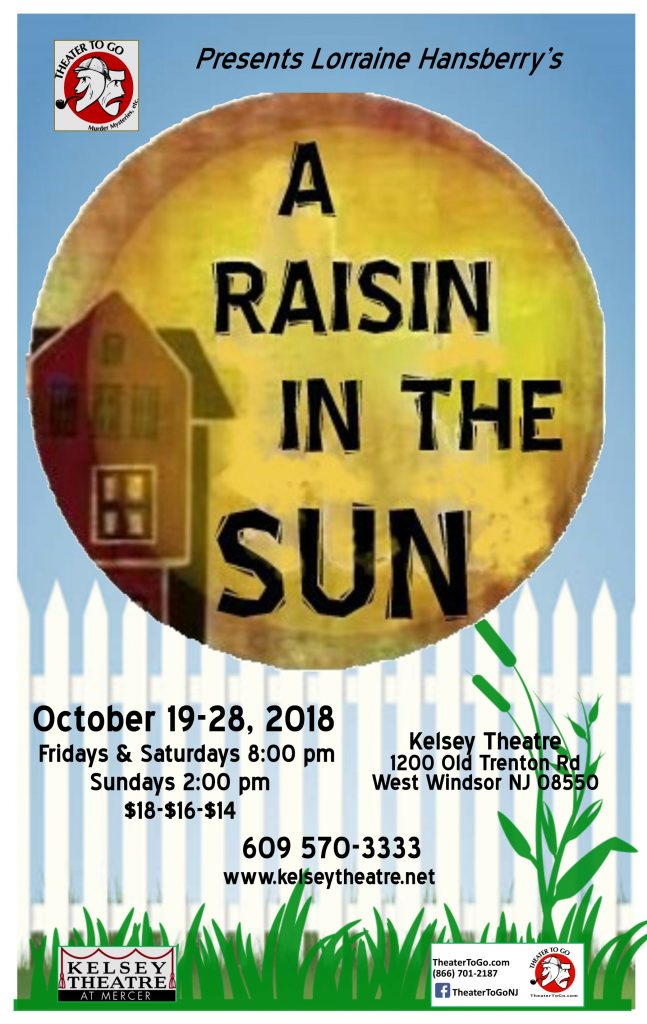 APPOINTMENTS SUGGESTED: Please prepare a dramatic monologue. You may be asked to cold read from the script
Please bring a photo and resume, or email to Info@TheaterToGo.com in advance of the audition
ONLINE sign up for audition time

REHEARSALS
Rehearsals will begin in late August/ early September and will be determined after reviewing cast conflicts
For questions or comments or to get some suggested readings from the play, please contact Ruth@TheaterToGo.com

SYNOPSIS
Set on Chicago’s South Side in the late 1950’s, the plot revolves around the divergent dreams and conflicts within three generations of the Younger Family: son Walter Lee, his sister Beneatha, his son Travis and Matriarch Lena. When her deceased husband’s insurance money comes through, Mama Lena has dreams of moving into a new home and a better neighborhood in Chicago. Walter Lee, a chauffeur, has other plans: buying a liquor store and being his own man. Beneatha dreams of medical school. The family tensions, and prejudice they face form this seminal American drama. The Younger family’s heroic struggle to retain dignity in a harsh and changing world is s searing and timeless document of hope and inspiration. (Samuel French description)

CHARACTERS: All roles are African American except for Karl Lindner

ABOUT THEATER TO GO
Theater To Go, under the leadership of Ruth Markoe, began in 1992 and has been providing quality entertainment in NJ and regionally since then. It is best known for audience participation murder mysteries and other interactive comedy theater however has expanded to include full length plays and staged readings. T2G produced the award winning production of TO KILL A

MOCKINGBIRD, Mark Violi’s historical drama ROEBLING: THE STORY OF THE BROOKLYN BRIDGE, which tells the remarkable story of the dedication and adversities of the Roebling family, with roots in NJ, that brought this magnificent national icon to New York. Under the direction of Ruth Markoe, this full-length play was recently performed to sold out audiences at Kelsey Theatre in West Windsor NJ. Other recent productions include RIDING THE COMET at the NY Theater Festival Summerfest and TWENTIETH CENTURY at Kelsey Theatre

City or Location of call: Trenton/Princeton NJ
Please submit to: ruthmnj@gmail.com by 2018-06-21

This casting notice was posted by: Theater to Go