Williams Street Repertory is excited to announce 2018 Winter General Auditions! Auditions for WSR’s upcoming productions of “Emma: a pop musical,” “The Elephant Man,” “All Shook Up,” and “Freaky Friday” will be held December 2, 3 and 5th, 2018 at Raue Center For The Arts, 26 N. Williams Street, Crystal Lake, IL 60014. 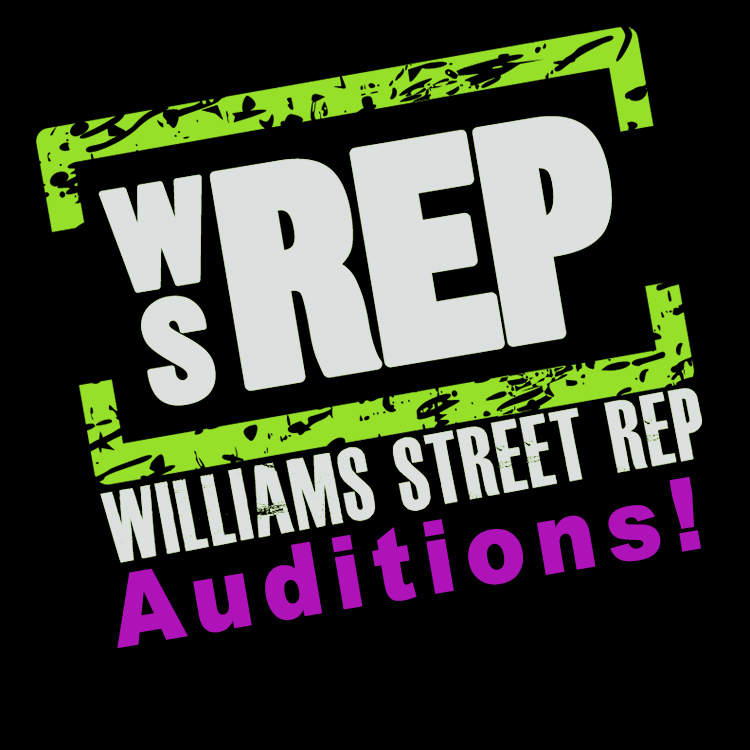 Emma, a senior at Highbury Prep, is certain she knows what’s best for her classmates’ love lives, and is determined to find the perfect boyfriend for shy sophomore Harriet by the end of the school year. But will Emma’s relentless matchmaking get in the way of finding her own happiness? Based on Jane Austen’s classic novel, this sparkling new musical features the hit songs of legendary girl groups and iconic female singers from The Supremes to Katy Perry. Girl power has never sounded so good!

EMMA WOODHOUSE-Female
A beautiful and smart high school senior who exudes confidence, especially when it concerns what other people should do with their lives. When it comes to her own life, she is not so sure, but she covers that up with witty banter, energy, and humor.

HARRIET SMITH-Female
A sophomore who is sometimes shy, easily swayed, and incurably romantic. Although her emotions can vary wildly, her sweetness never goes away.

JEFF KNIGHTLEY-Male
A super-smart, clean-cut senior who finds himself enlisted as a substitute teacher for the freshman and sophomore science classes. He is witty and has a good sense of humor, but he’s sometimes a know-it-all.

FRANKIE CHURCHILL-Male
A world-famous pop star who attended Highbury during his freshman year before he got a record contract and left school. He’s sometimes uncomfortable having such a glamorous persona and wishes his life could be a little more normal.

JANE FAIRFAX-Female
A junior from Ohio who is considering transferring to Highbury. She is rebellious and occasionally gives off a feeling of entitlement. But when she lets her guard down, she’s caring and genuine.

PHILIP ELTON-Male
A junior running for President of next year’s Student Council. He is snobby, arrogant, and a true politician, in the worst sense of the word.

MARTIN-Male
A sweet, shy, semi-dorky sophomore at the local public school. In his spare time, he works in the kitchen at Highbury as a dishwasher/busboy. His two favorite things are his bowling team and Harriet.

ASHLEY-Female
An exuberant and narcissistic junior who begins dating Philip. She’s an ambitious social climber who also wants to be an actress and a singer and is ready to perform for anyone at any time.

WESTON & MISS TAYLOR (LATER MRS. WESTON)-Male & Female
Two teachers at Highbury who get married in the first scene and leave for their honeymoon. They return in the final scene and kiss. These roles could possibly be cameos for two brave and lucky faculty me

THE WELCOMING COMMITTEE SINGERS-Females
A trio of captivating female singers, like a 1960s girl group.

The Elephant Man is based on the life of John Merrick, who lived in London during the latter part of the nineteenth century. A horribly deformed young man – a victim of rare skin and bone diseases – he becomes the star freak attraction in traveling sideshows. Found abandoned and helpless, he is admitted to London’s prestigious Whitechapel Hospital. Under the care of celebrated young physician Frederick Treves, Merrick is introduced to London society and slowly evolves from an object of pity to an urbane and witty favorite of the aristocracy and literati, only to be denied his ultimate dream – to become a man like any other.

Please Note: The roles of John Merrick and Mrs. Kendal have been cast.

Pinheads – a show act consisting of 2- 3 women suffering from microcephaly and mental retardation.

Nurse Sandwich – assures Treves she has cared for lepers in Africa and is quite prepared for anything, but even she cannot stand to look at Merrick.

Dr. Fredrick Treves – Mid to late 30’s – early 40s: A surgeon and teacher on the rise – curious, compassionate, and concerned about the world. A Scientist struggling with religion spirituality

Ross – mid 30’s – mid 50’s – the carny manager of John Merrick, the Elephant Man – an opportunist looking to make a quick buck. Self-preservationist even possible harm to others.

Bishop Walsham How – early 40’s – mid 50’s – A seminarist; religious and devout. He believes religion will win over the evolution of science. Could he be using Merrick as a way of morally showing others God’s true path?

Gomm – late 40s – late 50s – Administrator of the London Hospital – practical; thankful for small goods that come his way but know what side his bread is buttered on and count his blessing for it. A cynic of Religion; uses Merrick to raise contributions to the hospital.

“Pinhead” Manager – Manager of the Pinheads act at the fair.

Will -early 30’s -40’s – a porter of the London Hospital that gets fired for gawking at John Merrick.

Lord John – a member of High Society that uses Merrick as an opportunity to make some money and gamble it all away.

The music of Elvis comes alive in ALL SHOOK UP. Inspired by Shakespeare’s TWELFTH NIGHT, All Shook Up follows a small Midwestern town that is thrown into a frenzy with the arrival of Chad, a good-looking, motorcycle-riding roustabout, who rides from town to town with a guitar on his back, blue suede shoes on his feet, and a song in his heart. Repressed by their conservative mayor, the town begins to come alive once more under Chad’s influence. Lovers meet, woo, pursue, and more, all in one zany night that will change the town forever. All Shook Up is a rocking, heartwarming tale about following dreams, opening up to love, and the power of music.

ALL SHOOK UP/ Character Breakdown

Natalie Haller (Female Identified) Lead/Alto (Early 20s): a mechanic. Ability to play female and male energies. Looking to break free and try something new. Level-headed in business; trusted. Most people see her as “one of the guys” not the women she truly wants to be.

Chad (Male Identified) Lead/Baritone (20s-30s): a great-looking, motorcycling, guitar-playing, leather-jacketed roustabout. Charismatic. Think 1950s “bad boy”. Natural leader, people are drawn to him and what he has to say. The spark that reignited the town.

Jim Haller (Male Identified) Supporting/Baritone (40s-50s): Natalie’s widowed father. Kind and considerate, a little lost he wonders if love has passed him by. Hopeless romantic pining for his lost love.

Lorraine (Female Identified) Supporting/Alto. Sylvia’s 16-year-old daughter. Wants something more. Is willing to go against norms in the name of love. Youthful with a strong rebellious streak. Can be a person of color.

Dennis (Male Identified) Supporting/Tenor (20s-30s): a young, quirky and awkward, aspiring dentist. Blends into the background and is afraid to speak his mind. Definitely in the “friend’s zone”.

Miss Sandra (Female Identified) Supporting/Mezzo-Soprano- Alto (20s-30s): the beautiful, intellectual caretaker of the town’s museum. Strong-willed, she knows what she wants and won’t settle for less. A fire in her soul.

Dean Hyde (Male Identified) Supporting/Tenor Matilda’s 16-year-old son. He has grown up at a military boarding school. A teen looking for his first love. Bright, wide-eyed, a little repressed.

Sheriff Earl (Male) Supporting Baritone (mid 40s-50s): the law in town. A man of not many words. No-nonsense. Your typical small-town sheriff with his eye on the mayor.

When an overworked mother and her teenage daughter magically swap bodies, they have just one day to put things right again before mom’s big wedding. Disney’s Freaky Friday, a new musical based on the celebrated novel by Mary Rodgers and the hit Disney films, is a hilarious, contemporary update of an American classic in which a mother and daughter really see what it is to be a family and experience each other’s lives first-hand, if only for a day.

Preparation: Please prepare a short pop or contemporary musical theatre song in the style of the show.

ELLIE BLAKE, Mezzo belter with a strong warm mix, G3-Eb5. Katherine’s daughter – our reluctant hero – to play 16, smart, resistant, distrustful. Becomes a more loving, more understanding more invested daughter/sister/friend by the end of the story. A questioner. (Spoiler Alert) For much of the play, actress cast as Ellie will play Katherine (in Ellie’s body).

KATHERINE BLAKE, Mezzo belter with a strong warm mix, G3-E5. Ellie’s mother. to play 40‘s. A self-made woman who runs her own fledgling but up and coming catering business. Engaged to be married to Mike, tomorrow. – In her own words, she’s decisive, lovely, punctual. To Ellie, she’s cold, inauthentic, and strict. Becomes a more loving, more understanding, more considerate mother and boss and (Spoiler alert) wife by the end of the story. An upholder. For much of the play, actress cast as Katherine will play Ellie (in Katherine’s body).

FLETCHER BLAKE, Bb3-Eb4 Ellie’s little brother – to play 8-12, seeking a young actor good with silly voices, as he will voice puppets on his hand including ANGRY BOB, a wisecracking troublemaker and CASPIAN, a proper British starfish.

SEN’IOR O’BRIEN, Spanish teacher – feels his time is being wasted.

OFFICER KOWALSKI, police officer with little to no sensitivity training

ADDITIONAL ENSEMBLE ROLES TO BE DOUBLED BY ABOVE CAST

Please prepare 16-32 bars of a song from the modern musical theater (an accompanist will be provided, bring sheet music) and 1 monologue OR 2 contrasting monologues. Please bring your song book in the event you’re asked to sing something else.

All auditions will be filmed. This will be for the use of absent directors only. The footage will be deleted at the time of casting.

Thank you for your interest & we look forward to seeing you!
WSRep Casting

This casting notice was posted by: Williams Street Repertory