Have you always wanted to win some cash on a popular game show? Are you a pop culture wiz? Are you ready for a once in a lifetime of fun playing a game alongside your favorite celebrities? If so, Hollywood Game Night is now casting for contestants nationwide. Here is a chance to put your trivia knowledge to the test and maybe win $25,000,00.

Jane Lynch is coming back to host the house party for the new of the hit prime time game show. The show is currently accepting submissions for contestants and everyone interested may apply online. Hollywood Game Night combines Hollywood celebrities, game show contestants and some trivia games. The game show is set in an onstage living room with a “hanging with your friends” atmosphere. In between the jokes and the small talk, contestants compete in some fun, outrageous and often quite difficult games. The line between contestants and celebrities tend to get a bit blurred when everyone is racking their brain for the correct answer, well, in between cracking jokes.

Do you want to get in on the action of Hollywood Game Night? Are you on top of all that’s pop culture? Here is your chance because the game show is holding a casting call for contestants for this new season. Eligible contestants must be legal residents of the U.S. and at least 21 years of age 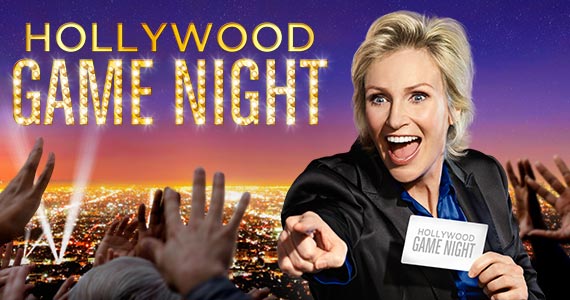 “You really do feel like you’re at a party with these people. This season, there’s a lot of new celebrities where people are having fun and the line blurs between celebrity and friend and they all just become gamers. ”

So, Jane Lynch Invites You To The Wildest Party In Town! Check out the casting call flyer below for further information about how to submit for the show. The series is back, and this time host Jane Lynch is ready to rock and roll, and maybe throw some curve balls in there just for fun.
Your favorite game show with Emmy Award Winner, Jane Lynch is back and now casting additional episodes!

Are you fun, outgoing, and pop culture savvy?

For your chance to participate in a once-in-a-lifetime night of fun and celebration, See this page for the application and further information about getting cast on a Hollywood game show.