THE OUTSIDER by Paul Slade Smith

Dates:
• Sunday, July 11th at 6:30PM
• Tuesday, July 13th at 6:30PM
CALLBACKS BY INVITATION ONLY on Wednesday, July 14th at 6:30PM
Cold readings from the script will be provided. Please bring ALL conflicts between the time of auditions and the opening of the show.
• The ONLINE AUDITION FORM is available here:
https://forms.gle/EDkPGJZdiezsmX3b9
• If preferred, you may PRINT, FILL OUT, and BRING TO AUDITIONS the hardcopy audition form. It is downloadable HERE.
SHOW DATES are October (2021) 8, 9, 10, 15, 16, 17, 22, 23. All actors who are cast MUST be available for all show dates, as well as tech week (Sunday, October 3rd through Wednesday, October 6th) and benefit shows on weeknights throughout the run (which will be announced later in the summer).
REHEARSALS are Sundays at 5PM, Tuesdays at 6:30PM, and Wednesdays at 6:30PM.
Note that if you cannot make AT LEAST two of these three days, that does not necessarily disqualify you from being considered.
SYNOPSIS
Ned Newley doesn’t even want to be governor. He’s terrified of public speaking; his poll numbers are impressively bad. To his ever-supportive Chief of Staff, Ned seems destined to fail. But political consultant Arthur Vance sees things differently: Ned might be the worst candidate to ever run for office. Unless the public is looking for… the worst candidate to ever run for office. A timely and hilarious comedy that skewers politics and celebrates democracy. ?
CHARACTER DESCRIPTIONS
Ethnically diverse cast desired. Ages negotiable.
• PAIGE CALDWELL – Female, 20s to 40s. A professional pollster. A smart, confident woman with a professional’s view of politics: she sees it as a series of contests to be won.
• DAVE RILEY – Male, 30s to 40s. The Chief of Staff to the new Governor. Very smart, but – despite years of experience in government – endearingly earnest and naïve on the subject of politics.
• LOUISE PEAKES – Female, 30s to 50s. A temporary employee hired as the Governor’s executive assistant. Personable, likable, impressively confident, and entirely inept. Without knowing it, she has the air of a politician about her. The friendliness of her smile, and the confident way she looks you in the eye, would make you think, “I’d vote for her.”
• NED NEWLEY – Male, mid-40s to 60s. The new Governor. A person of impressive ability, but a complete lack of confidence. A man awaiting permission to enter a room in which he is already standing.
• ARTHUR VANCE – Male, 50s to 60s. One of the most experienced and successful political consultants in the country. His overbearing personality, and confidence in his own opinions over the opinions of others, should make him dislikable, but his ego is more than tempered by the joy – even glee – he brings into the room. He’s a showman, but his excitement is 100% genuine, and it’s contagious.
• RACHEL PARSONS – Female, 30s. A TV reporter. She has the looks to be an on-air correspondent – though, if television had never been invented, she still would have been a journalist. Straightforward and honest, and inquisitive by nature. She’s seen enough of life and politics to be cynical, but she’s more apt to make a wry joke.
• A.C. PETERSEN – Male, 30s to 50s. A TV camera man. A working man, and, for most people, the guy you didn’t notice was there. Which is fine with A.C. – he has a low tolerance for idiocy and would rather not interact with anyone. His near-silence doesn’t make him seem unfriendly, just a bit of a mystery.

NOTE: If new to acting and willing to take on a small role, please indicate one of roles listed as “may be doubled” or “can be doubled”
CREW MEMBERS & NEWBIES
Audition nights are a perfect time to come out, meet the director, and express your interest in helping out backstage, be it in the role of a stage manager, lights & sound operator, concessions, or whatever else you might like to do.
They’re also GREAT for first-timers to come out and observe how things are done, maybe express interest in being a helper, or read for a part! We almost always cast at least one person who’s never been on stage before. You never know what can happen!
Questions? Please contact Director Ashley Lora-Lee at ashley@thevillageplayers.com.

City or Location of call: Philadelphia, Pennsylvania
Please submit to: ashley@thevillageplayers.com by 2021-07-13
Auditions consist of cold readings from the script. Please visit the VPH website for more information: https://www.thevillageplayers.com/2021/06/auditions-for-the-outsider/

This casting notice was posted by: The Village Players of Hatboro 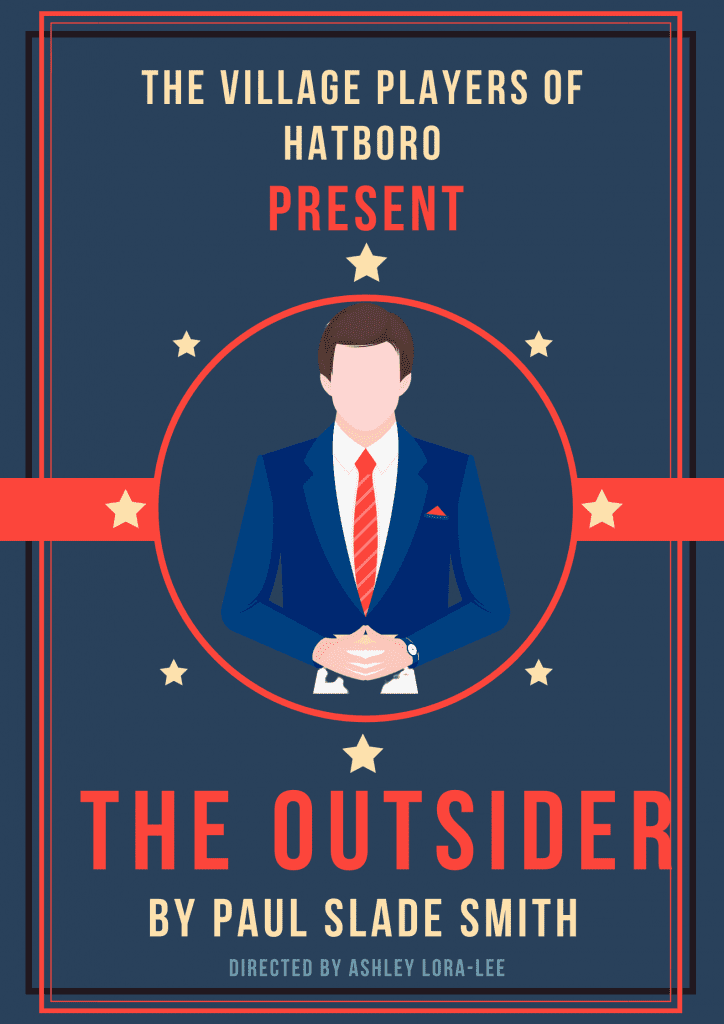