Auditions are open to fill a lead role in an upcoming movie filming in the Rio Grande Valley in spring of 2023.

Casting directors are seeking an actor to play a male role between the ages of 15 and 21. The role is looking for someone to portray a Mexican American teen.

Vicky Boone Casting is casting Mexican American and Mixed Ethnicity men ages 15-21 to play leading roles in an upcoming major SAG feature film directed by Carlos López Estrada (Blindspotting, Raya and the Last Dragon). The film will begin shooting in the Rio Grande Valley and San Antonio area next April. We’re searching for young men who are outgoing, with a sense of humor, and passionate about music, especially punk rock! Musical experience is a plus!
Who we’re looking for:

CARLOS GUERRERO – 15 to 21 years old, Mexican American male. Chubby. Carlos is single-minded in his dream of becoming the greatest drummer alive. Passionate and determined, he is willing to do whatever it takes to secure his first steps to fame by locking in a gig for TeknoKrap, the punk band he shares with his best friend Leo. LEAD
LEO MCSWAIN – 15 to 21 years old, Mexican American or Mixed Ethnicity male. Skinny, purple hair. As the lead singer of punk band TeknoKrap, Leo dreams of making it big with his best friend Carlos. LEAD

To be considered for a role, please send the following to tvfilmsubmissions@Vickyboonecasting.com ASAP:
-Name:
-Phone/email:
-Two recent photos (one close up, one head-to-toe shot):
-Age (if under 18)
-City you live in:
-A brief explanation of any musical experience you have.
-(Optional) If you have musical experience, or are in a band, feel free to share videos of you rehearsing or performing!
-Please use the subject line “CARLOS” or ”LEO” depending on the role you are submitting for.
Please share widely in your RGV and Texas circles! We look forward to your submissions! 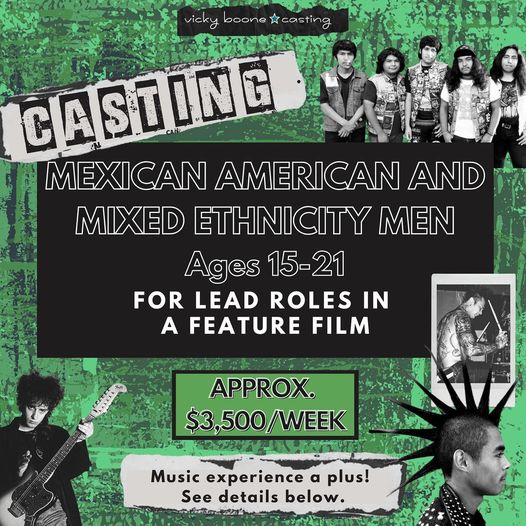