Hi all, we’re looking for actors/actresses (preferably based in London/Midlands) for an upcoming production ‘BIBINGKA’ for the following three roles:

Aria SOUTH EAST ASIAN FEMALE (40-55)
Diminutive in frame. Unadorned. Ten years ago Aria left the Philippines to provide for a family she never sees: her three daughters and husband. In a year’s time her children will have completed their education, and she’ll be able to return home. As the date nears, she considers what she might have lost in the process. Her sacrifice – and what it’s cost – weighs heavily on her.

Gareth WHITE (EARLY 20s)
Skinny. Brought up comfortably middle-class, Gareth has never worried about his future. Pursuing his passion for rapping, despite an obvious lack of talent, Gareth’s enthusiasm and self-confidence are sorely misplaced. His insecurities present as arrogance and selfcenteredness – his shortcomings are evident and comical.

Ozi BLACK FEMALE (40-55)
Working two jobs and raising a daughter alone has taken its toll; Ozi is slightly overweight and wrinkles are starting to appear. Her timeless beauty is expressed by a warm, effervescent smile. Ozi is the sole breadwinner for her family in Ghana. She struggles to balance
providing for both herself and Amma in the UK, and her family back home. She’s exhausted, but stoic and driven by her responsibility to her family.

This is a baby budget production that we are aiming to get BFI funding for (TBC). So at the moment we can offer the main actors NMW per hour.
Filming for a few days around mid- to late-September 2022, dates TBC.

City or Location of call: London/Midlands, United Kingdom
Please submit to: heongcien@gmail.com by 2022-07-30
Email name, picture and state if you have family/a relative (who can portray a mother) with email subject as ‘BIBINGKA CAST’

This casting notice was posted by: Somewhere Films 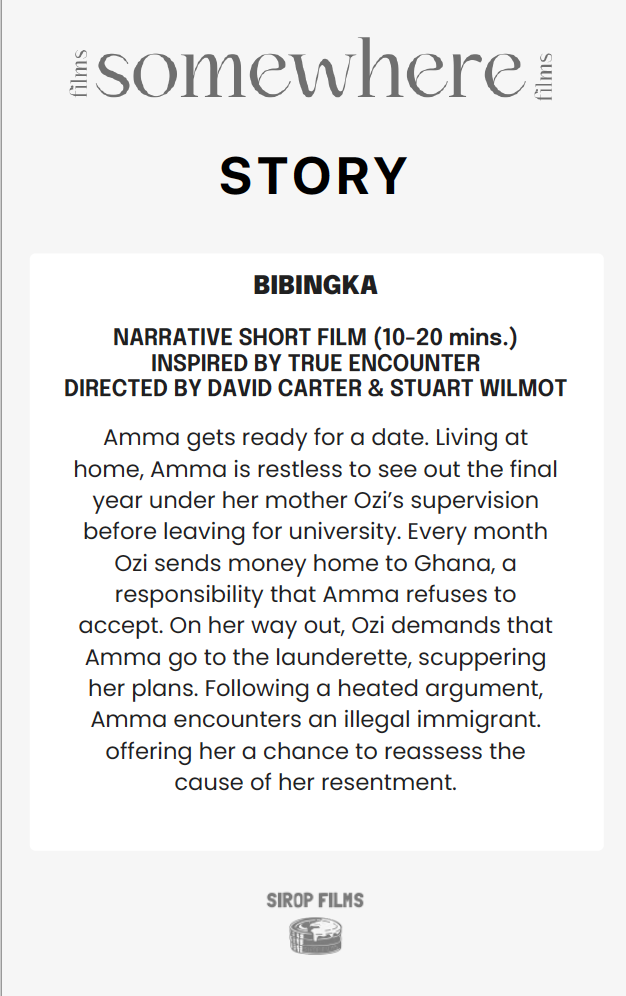