First two rounds of audition is not in person. Audition includes self tape and callbacks on Zoom.

ISAAC STECKER: Starring, Male, 18-25. Casting male actor between 18 and 25. A troubled high school senior. Pale with dark hair. Plagued by spirits who are drawn to him, and a demonic entity attaches itself to him to manipulate his gift. We are a NON-UNION production paying SAG micro-budget day rates and higher. Ethnicity: Caucasian or Latino. Required Skills: Fighting / Stunts.

KATHERINE LINDERBROOK: Starring, Female, 18-25. Casting female actor between 18 and 25 to play main character Isaac’s best friend who lives down the street. The type of girl every awkward loner crushes on with a Winnie Cooper type beauty. Smart and fiery with a deep interest in the paranormal because of Isaac’s experiences. Ethnicity: All Ethnicities.

JOHN STECKER: Supporting, Male 40-50. Casting male actors between 40 and 50 to play main character Isaac’s father. Very handsome older man with an empathetic demeanor. He keeps an open mind about Isaac because he thinks the spirits Isaac sees just might be real while his wife thinks it’s all in Isaac’s head. Ethnicity: Caucasian or Latino.

JOE: Supporting, Male 18-25. Casting male actors between 18 and 25 to play the bully’s friend / acquaintance who likes co-star Katharine. He dresses like his bully friend, but he acts much different. He takes issue when James starts taking the bullying too far. Ethnicity: Black.

GRANDPA / GRANDMA: Supporting. Male or Female 60-70. Casting male or female actors between 60 and 70 to play Isaac’s grandparent who appears as an agonized ghost in the funeral scene.

KEENAN: Supporting, Male 18-25. Casting male actors aged 18 to 25 to play the friend of the main bully. Presents himself as the follower of bully James but has a mean streak and a bad upbringing that ultimately makes him a bit of a psycho himself. Ethnicity: Any Ethnicity. Required Skills: Fighting / Stunt experience a plus.

ROBERT: Supporting, Male 18-25. Casting male actors aged 18 to 25 to play the friend of the main bully – The passive follower who likes being in his little gang of thugs but gets scared when things start getting violent. Ethnicity: Any Ethnicity. Required Skills: Fighting / Stunt experience a plus.

DISTORTED LITTLE GIRL: Supporting, Female 10-14. Casting female actors aged 10 to 14 to play an innocent soul that is attached to the film’s villain because he killed her. Ethnicity: All Ethnicities.

City or Location of call: Los Angeles, CA
Please submit to: theDeadPlaceMovie@gmail.com by 2022-05-31
Headshot and Resume. Please see details about self tape and CALLBACK auditions

This casting notice was posted by: Lania Stewart, Producer with The Dead Place 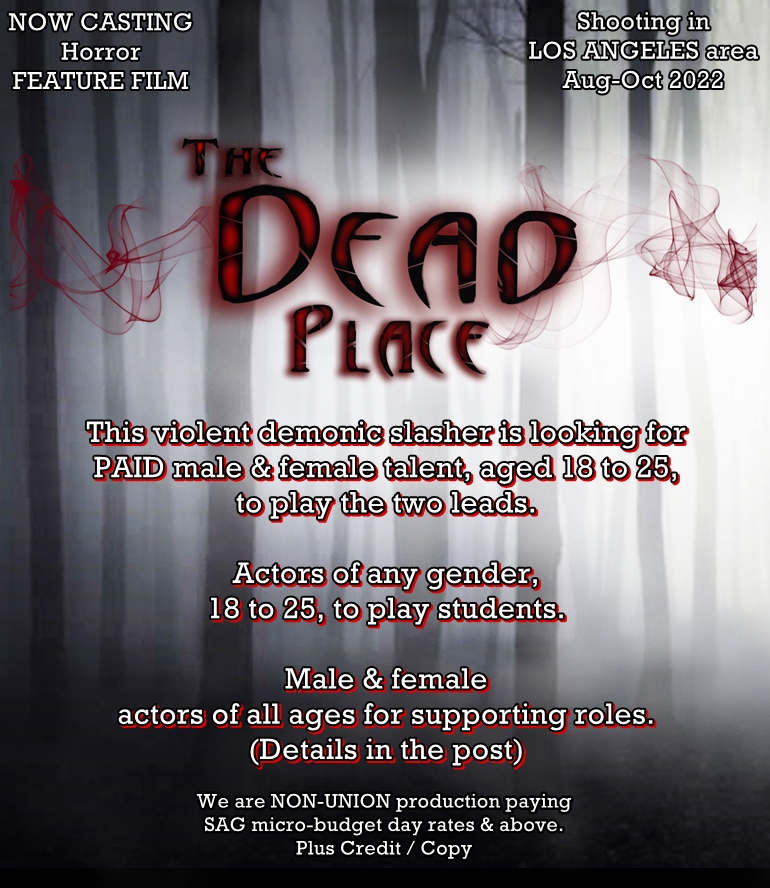