Seeking actors ages 8-21.(non-union)
The Athens Theatre strongly encourages performers of all ethnicities, and gender identities, as well as performers with disabilities, to submit.
We are accepting electronic submissions to audition.

Submissions must be submitted through Auditions Manager no later than Sunday, November 13th at 11:59pm. Any submission received after 11:59 pm on November 13th will not be considered.

The Athens Theatre strongly encourages performers of all ethnicities, and gender identities, as well as performers with disabilities, to submit.

Matilda Wormwood
The hero of the show. She’s brilliant, resilient, creative, and kind, despite growing up in difficult circumstances. Her parents treat her poorly, but Matilda escapes into a world of books, which puts her reading level far above the other children in her class, and she develops a bit of magical power in an effort to defeat Trunchbull.
Vocal range top: D5
Vocal range bottom: Bb3

Eric
A student at school with Matilda. He has the very first solo line of the entire show, so make sure to cast a good singer in this role. Eric also has some featured moments as one of Matilda’s schoolmates, so it’s helpful if Eric is also expressive.
Vocal range top: Eb4
Vocal range bottom: C3

Amanda
A student at school with Matilda. She has a few solos and lines, but her most featured moment is when Trunchbull throws her through the air using her pigtails.
Vocal range top: Eb5
Vocal range bottom: C4

Bruce
One of Matilda’s schoolmates. He has the bad luck to get caught after eating Trunchbull’s cake. Bruce goes through quite a transformation throughout the show and has some important solos, so cast an excellent singer and actor. Keep in mind that just because Bruce eats the cake, it doesn’t mean he has to be physically larger than the other children – Bruce is just an actor who can portray their journey throughout the show.
Vocal range top: F#4
Vocal range bottom: C3

Lavender
One of the kids at school with Matilda. She is kind and bright (though not as brilliant as Matilda) and quickly decides that Matilda is her best friend.
Vocal range top: D5
Vocal range bottom: C4

Nigel
One of the kids at school with Matilda. He is enthusiastic, sweet, and always in a bit of a panic. Nigel has a few solos and some great featured moments in the show.
Vocal range top: D4
Vocal range bottom: C3

Mr. Wormwood
Matilda’s father. He is egotistical, rude, and not very bright, not to mention a liar. Though Mr. Wormwood is not a good person and he is mean to Matilda, his harebrained schemes can be hilariously funny. It’s helpful if Mr. Wormwood reads as older onstage and makes a dynamic pair with Mrs. Wormwood.

Mrs. Wormwood
Matilda’s mother. Like her husband, she dislikes Matilda and does not understand why her daughter loves to read. Mrs. Wormwood is selfish, obsessed with her own appearance, and believes everything she sees on TV. Her dancing lessons with Rudolpho are the most important part of her day.

Michael
Matilda’s brother. He is not very bright, though he is the apple of his father’s eye. This is a hilarious supporting role for a younger actor with comedic timing, as Michael’s contributions to the scene usually function as deadpan one-liners.

Mrs. Phelps
The kindly librarian who loves hearing Matilda’s stories. This is a great featured role for a stronger actress who reads as older than Matilda onstage.

Escapologist
A character of Matilda’s creation. Everything this character does is grand and exaggerated – he’s performing for the cheap seats!
Vocal range top: F3
Vocal range bottom: E3

Miss Honey
A teacher at Matilda’s school. She is kind, is generous, and really cares about the children despite her own desperate circumstances.
Vocal range top: D5
Vocal range bottom: Bb3

Agatha Trunchbull
The quintessential terrifying tyrant. As headmistress, she runs her school like a dictator, making up arbitrary rules to suit her every whim and dreaming up creative punishments.
Vocal range top: F#5
Vocal range bottom: C4

Sergei
A customer swindled by Mr. Wormwood. Though he shows up looking for payback, Matilda has had quite enough of revenge, and Sergei lets the Wormwoods escape.

We are accepting electronic submissions to audition:

Please submit headshot, résumé, a self-taped recording of a 16-32 bar cut of a musical theatre song in the style of the show, and a dance reel (if available).

Submissions must be submitted through Auditions Manager no later than Sunday November 13 at 11:59pm. Any submission received after 11:59 pm on November 13 will not be considered.

Callbacks are by invitation only and will take place on Monday, November 28th, from 5:30 pm – 8:30 pm for MATILDA JR. 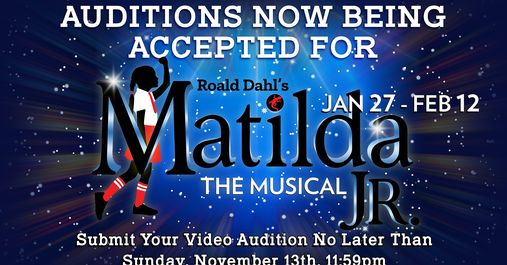