Jack and the Beanstalk

WYMPS creates exciting pantomime-inspired musical comedies, turning classic children’s fairy tales into raucous nights of spicy innuendos and fantastic music for an adult audience.
We are excited to announce we are holding open auditions for our company debut, Jack and the Beanstalk, on the 5th of March at 10am in the Lending Room! This original show will be performed for the first time at FUSE International 2022 in Kingston, London, in July.

The show:
WYMPS’ take on Jack and the Beanstalk, written by Demetria Paxton, follows our hero Jack Virgin and his mum, Stella. The pair are terribly poor thanks to the harsh taxes of the evil Baron Hardon, who deems Jack far too poor for his beautiful daughter, Jill. In order to win Jill’s heart, Jack must contend with the Good Head Fairy (or was that the Head Good Fairy?), his friend Sean’s explosive outbursts, and a giant with a gun. And a beanstalk, we suppose.

The characters:
Jack Virgin (lead boy) – Jack is as loveable as he is stupid. Jack is easily led and easy to trick, but is fiercely loyal, whether that’s to his best friend, Horse, or to Jill, who he decides he will marry after meeting once. Jack is the biggest singing role in the show.

Jill Hardon (lead girl) – Jill has known nothing but wealth and luxury her entire life, and you can tell. Ultimately a sweetheart, Jill knows what she wants, and she’s going to get it.

Baron Hardon (villain) – the Baron begins the show as the villain, but gains nuance in act 2, eventually becoming a love interest. He is very over-dramatic and somewhat self-obsessed, but somewhere deep, deep down, there is a good heart in there.

Head Good Fairy (narrator) – the HGF is a bit of a bitch, and she’s not sure how she got promoted to being head of the fairies, but she’s not about to be cheated out of the job of a lifetime by Jack and his antics!

Buttons – chronically alone and desperately in love with Jill, Buttons’ primary characteristic is yearning. This role requires a very strong voice and a willingness to sport tear-away trousers (we can explain).

Smaller roles:
Sean and Sharon – side characters with a dramatic love story.
Giant and Harp – a villainous pair that live in the clouds.
Kate, Girk, and Mrs Grocer – villagers with some big opinions on Jack and how he chooses to live his life.
The Good Fairies – The good fairies will serve under the Head Good Fairy and will be the principal dancers.

Scenes and dances will be provided/taught on the day, but please prepare a song of your own choosing that best showcases your singing voice. Please email backing tracks to demetria@wymps.co.uk.

Callbacks will be held on the 7th and 8th at the University of Leeds.

Rehearsals will run from April until the end of June, and we aim to offer travel to and from Kingston, food, and accommodation during the festival to be paid for by WYMPS.

This casting notice was posted by: WYMPS 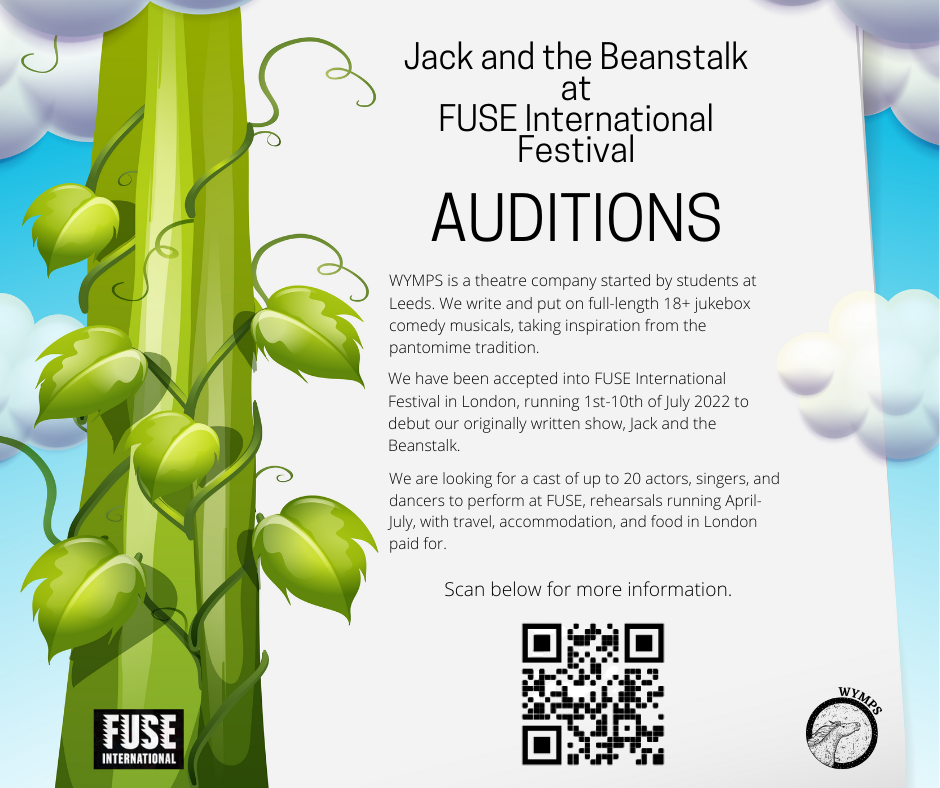