An Alaskan hotel is holding a casting call for a commercial they are working on.

The folks at the Dimond Center Hotel are worried they may have a bit of trouble casting the commercial considering the Hotel is in Seldovia Alaska which boasts a population of 255 people (per the US census)! The area is a big tourist attraction and offers lots of shops, restaurants and a nearby airport.

Seldovia is a city in Kenai Peninsula Borough, Alaska. It is located along Kachemak Bay southwest of Homer.

You can learn more about the Dimond Center Hotel to see if this is for you. While the TV commercial does not offer any pay, the hotel did state that they would be willing to help with accomodations since most people applying for this will most likely come in from out of town!

The Dimond Center Hotel is producing a few new commercials and we would love to bring in some Seldovia talent! If you are interested, and planning to be in town around mid November, (exact date to be determined) we’d like to hear from you! It will be an unpaid casting, and we are sure to work with people on lodging arrangements for the night of production. We realize there would be a logistical issue getting Seldovia residents able to participate, which is why we elected to get this notice out as soon possible so folks would have time to plan!

If you are interested, please let us know as soon as possible. We will work with you as specific dates as confirmed.

The hotel also released the casting flyer below which explains who to call to apply for this. You can click on the below image to enlarge it. 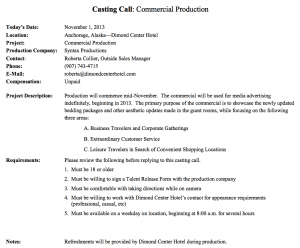