The live stage show “Evil Dead” playing at Planet Hollywood in Vegas is holding auditions next week to fill 4 spots in the cast. The show is looking for 2 male and 2 female performers. Auditions will be held by appointment only in Las Vegas.

About The show:
What’s the show that people keep returning to again and again, sometimes yelling the lines along with the actors and sometimes interacting with lines of their own? You might think ROCKY HORROR, but in this case you’d be WRONG.

It’s EVIL DEAD THE MUSICAL, the surprise hit of the Strip that’s painting Las Vegas BLOODY!
Five college students go to an abandoned cabin in the woods, and accidentally unleash an evil force that turns them all into demons. It’s all up to Ash (a housewares employee, turned demon killing hero), and his trusty chainsaw to save the day. Blood flies. Limbs are dismembered. Demons are telling bad jokes… and all to music.

Yep, this could be you! 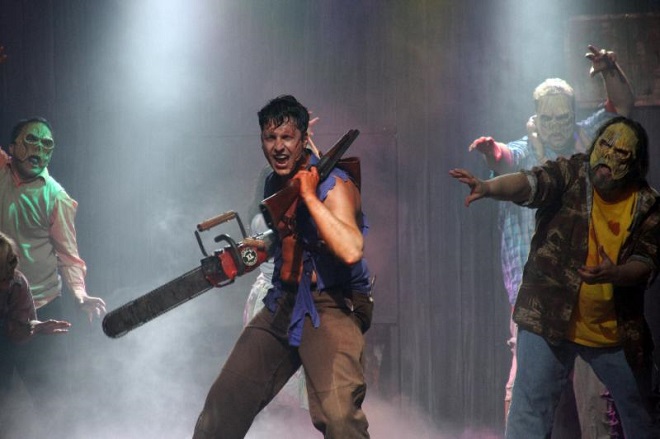 EVIL DEAD THE MUSICAL Ultimate 4D Experience, the award-winning Las Vegas hit that plays at the V Theater in Planet Hollywood at the heart of the world famous Las Vegas Strip, is announcing auditions for the show.

“The show is moving into its second year,” says the show’s producer and director Sirc Michaels, “And as the show moves into the future we are looking to add to our cast. We are proud of the growth the show has experienced since we’ve opened on the Strip, and are excited by what the future holds for us.”

2 Male and 2 female performers are being sought for positions. Ages are various.

Interested persons must meet the following criteria:
1. Located in Vegas.
2. Able to sing.
3. Have comedic timing.
4. Love to have fun onstage.
5. Be 18 years of age or older.

Interested parties should submit a headshot and resume to Sirc Michaels Productions at sircmichaelsproductions@gmail.com. They will be contacted to schedule an appointment to audition.

Auditions will be held the week of May 12th and are by appointment only. Video submissions will not be accepted.