Do you live in Alabama, Arkansas, Georgia, Mississippi, Louisiana, North or South Carolina and single? A new CMT series may want to cast you for a new reality series. The show is looking for people who can show the rest of us how dating in a small town can be so much different than dating in a big city. The show will be holding open casting calls in early January 2015 and will be taking online (email) submissions as well. Casting directors will be in Georgia, South Carolina and Alabama this coming January. You can see the dates and locations of the open casting calls on the flyer below.

Are you looking for love in a very small Southern town? Casting directors for CMT are looking to cast some Small Town Southern Singles! Need some help from my southern friends!  Need people in towns of less than 5k and far outside of big cities!

Where should I look y’all? I’m hitting the road as well.

CMT Is Casting A Dating Show In Small Towns of the SOUTH! It’s Sex in the City, if it were a city of under 5k, meets Party Down South!

– Single and actively dating?
– Appear to be between the ages of 18 and 32?
– Live in a small town (less than 2k people) in the South, at least an hour from any big city?
– Big personality & fun?

Write me today with your name, #, email, a bit about why we should come to film you, and a recent photo.

We also will be coming to a city near you for in person casting 1/5-1/12, let us know if you will be able to attend!
Perry GA
NewBerry SC
Boone NC
Searcy AR
Tupelo Ms
Prattville AL

City or Location of call: The South – AL/AR/GA/MS/LA/SC/NC
Please submit to: cmtsmalltownlovecasting@gmail.com by 2015-01-10

This casting notice was posted by: Thecastingmuse 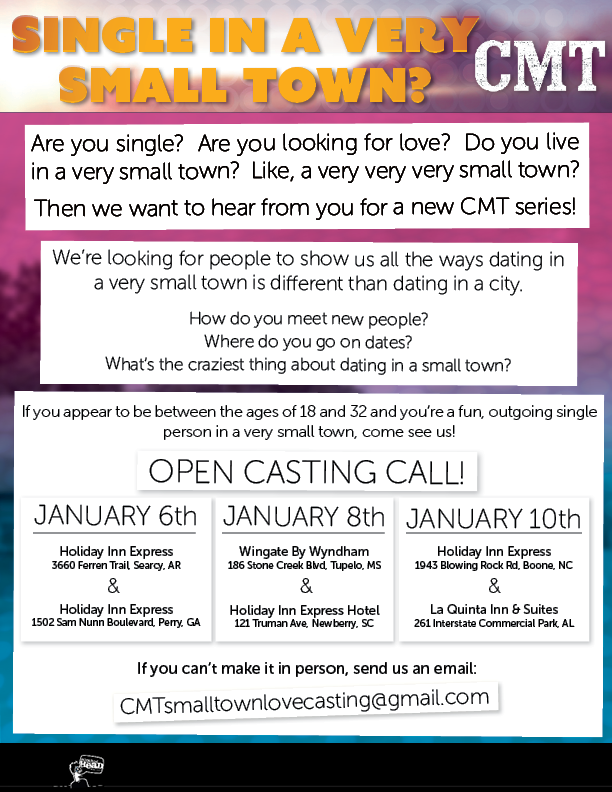