“Fast & Furious 7” is now back in production.

Great news for F&F fans, the 7th installment of the “Fast & Furious” franchise is filming again and has a new theatrical release date.

The film was in production last year and was brought to a halt by the tragic death of Paul Walker. The film is back on and the film will be getting finished. There is an open casting call scheduled in the Los Angeles area in the second part of this month.

After the death of Paul Walker, the movie ceased production and initial news coverage stated that the film would not continue. However, they eventually did decide to finish the project. The NY Daily News ran a story yesterday about the film and according to the Daily News, Paul Walkers brothers have joined the cast. The story included the following quote from Paul Walkers dad regarding their initial hesitance in joining the project… “I had a hand in convincing Caleb and Cody,” Paul Sr. said in his Los Angeles home. “We had a pep talk because it was something they were obviously very skeptical of doing and I think it helped.” According to the Daily News story, Paul’s father wanted his 2 younger brothers to step in and help finish out the film.

The movie will be filming scenes in the Palmdale / Lancaster area and is holding the open casting call in Lancaster on the 21st. Production is set to begin in July. Los Angeles and Palmdale residents who wish to participate in the film can come on down to the Lancaster location to meet with the film’s extras casting directors.

After killing Owen Shaw and his crew, Dominic (Vin Diesel), Brian (Paul Walker) and their crew are able to return to the United States and live the normal life again as they had wanted. But, Owen’s older brother, Ian Shaw (Jason Statham) is after Dominic, seeking revenge for the death of his brother, and after staging Han’s death, the crew sets out to kill the man who killed one of their own.

I suppose we shall have to wait and see what if any, plot changes have been made.

Those interested in being extras and background talent on “Fast & Furious 7” can check out the below casting call flyer for all the details. Those planning on attending need to bring a snap shot of themselves they can leave with the casting directors as well as a pen and ID. 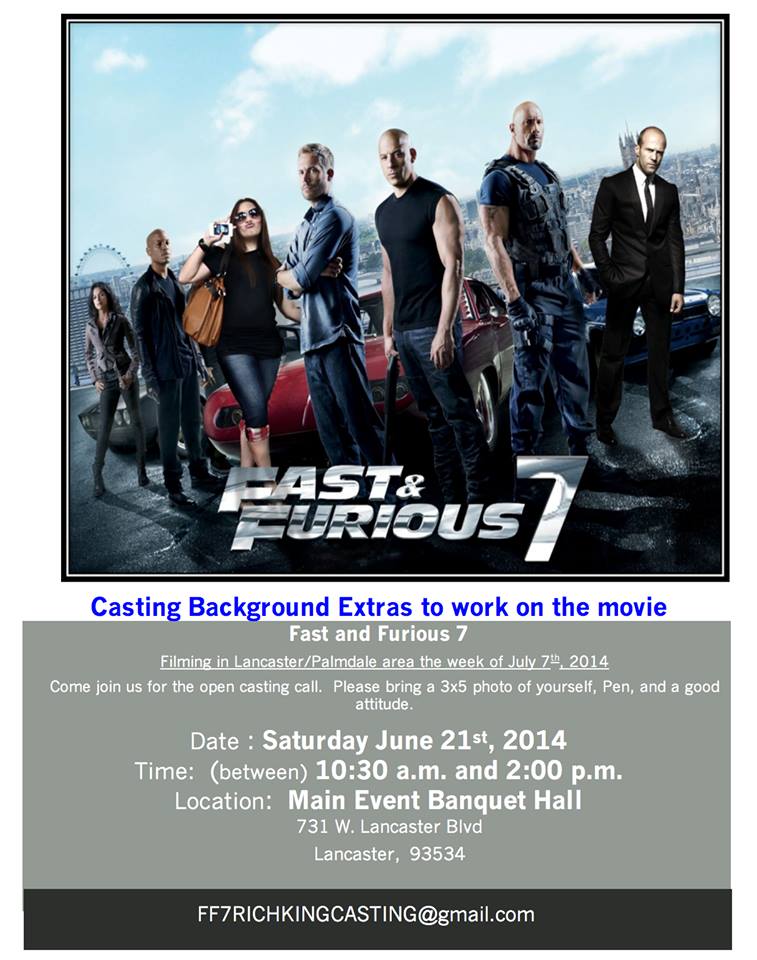 Palmdale is about an hour north of Los Angeles in the California desert.