Do you live in the St. Petersburg, Florida area and looking for a chance to be in a movie? If you do not mind not getting paid, here is your chance to get a little screen time.

The movie is filming in the Tampa Bay Florida area and has an upcoming scene in Derby Lane, St. Petersburg that will be needing lots of folks this Thursday night. The roles are non-paid but casting directors believe everyone involved will have a great time.

Brad Furman ( The Lincoln Lawyer) will direct the film which is inspired by a true story. According to IMDB, Bryan Cranston has the lead and the film will also be starring John Leguizamo, Diane Kruger, Amy Ryan, Joseph Gilgun, Benjamin Bratt, Juliet Aubrey and Simón Andreu. The film centers on U.S. Customs undercover agent Robert Mazur and is set in the 80?s and 90?s. Amidst the lavish excess of the 1980s, Robert Musella became a pivotal player for drug lords cleaning their dirty cash. He traded on mob connections to become the confidant to scores of the international underworld, and the bankers who enabled them. 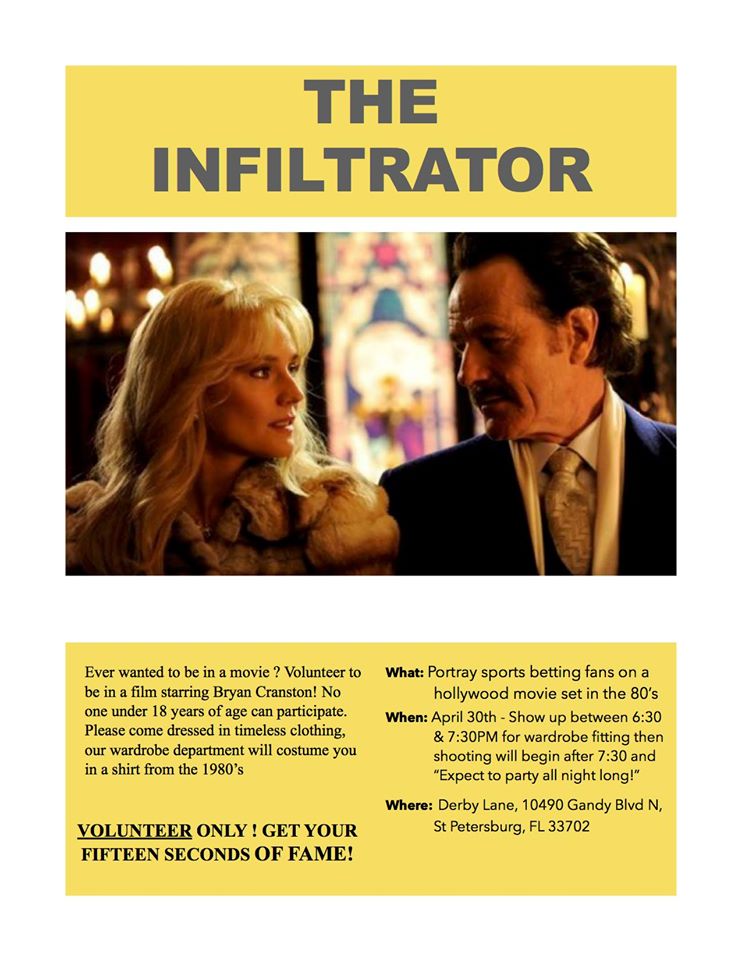 The film needs extras to play sports betters on a Hollywood movie set of the 80’s. Those interested may show up at Derby Lane at 6:30 this Thursday night. You must be 18+ to participate and casting directors are asking that everyone joining in the scene come dressed in what they are calling a ‘timeless’ outfit. The movie is set in the 80’s and the wardrobe department will be on hand to fix up your look. Filming will begin at 7:30 and go into the night.

The Infiltrator in Tampa Bay!

Thursday night, looking for a good time? Come to Derby Lane in St. Petersburg at 6:30 for your chance to be in a film starring Bryan Cranston.
Must be 18 Years and older to participate.

At this time it is volunteer extras only but we are sure to have fun! Expect to party all night long.