TV series “Gunslingers” is about to begin production for season 2 and will be holding open auditions for principal roles this coming weekend.

An open casting call is scheduled for this coming Saturday in Santa Fe. The series casting directors are seeking 1800’s cowboy types as well as an African American woman. Horseback riding and weapons experience is helpful for those who are auditioning for the cowboy roles, but not mandatory. If you live in the area and think you would make the perfect cowboy…. check it out.

The series will begin filming this coming March and go through April.

“Gunslingers” premiered last summer on AHC (American Heroes Channel) as a 6 part mini-series. The Western documentary style series brings the infamous names of the old wild west to the TV screen. According to the AHC page for the show… Infamous names of the Wild West are familiar to many, but much of what is accepted as fact about that lawless time is more legend than truth. The six-part historical docudrama “Gunslingers” strives to expose the actual, often little-known adventures of the period’s iconic characters, and how their fearless pursuit of freedom and profit still resonate. Stories of Wyatt Earp, Billy the Kid, Jesse James, Wild Bill Hickok, John Wesley Hardin and Tom Horn proceed via cinematic re-enactments, juxtaposed with commentary by, among others, “Deadwood” creator David Milch, Executive Editor Bob Boze Bell of True West magazine, and actor Kurt Russell, who played Wyatt in 1993’s “Tombstone.” 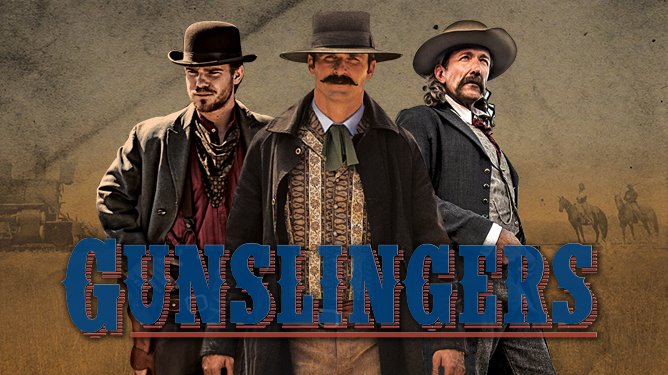 MIDTHUNDER CASTING
THE FILM SCHOOL @ GARSON STUDIOS
ROOM #101
1600 ST. MICHAEL’S DRIVE,
SANTA FE, NM 87505
(The Film School is on the other side of Garson Studios – just northwest of The Screen)

Be prepared to read the following lines for the role of “Cowboy.”
Cowboy:
“Stranger, you need help?”
Man:
“No, thanks anyway.”
Cowboy:
“You look like a lawman.”
Man:
“As a matter of fact, I am.”
Cowboy:
“You lookin’ for someone? I might be able to help you out.
I know all the lowlifes ‘round these parts. But it’ll cost ya’…”
*additional sides may be given out at the casting call