Casting Call for Once Upon A Mattress – Port Washington, NY

Casting Call for Once Upon A Mattress!

Music by Mary Rodgers, lyrics by Marshall Barer and book by Jay Thompson.

Callbacks: At same location by appointment beginning Saturday April 9, at 6pm and Sunday April 10, at 4pm.

Story: Due to an unhappy curse, King Sextimus is unable to speak so his terror of a wife, Queen Aggravian, has taken over control of the kingdom. In an attempt to keep her ‘mama’s-type-boy’ Prince Dauntless single, she has decreed that only the princess that can pass her test may marry her son. Furthermore, no one else in the kingdom may marry until Prince Dauntless does. Lady Larken and Sir Harry are extremely disturbed by this fact since Lady Larken is now pregnant with Sir Harry’s baby. After princess number #12 fails to pass the queen’s test, Sir Harry goes in search of another candidate and luckily finds an amazing princess-Winnifred the Woebegone “Fred.” She instantly catches the attention of Prince Dauntless, and in the end, is able to pass the Queen’s supposedly impassable sensitivity test (a pea under a mattress). When the Queen still tries to prevent the Prince Dauntless from marrying, he tells her to ‘shut up’ which ends up breaking the curse on the king. Now able to speak, King Sextimus regains his rightful position as leader of the kingdom, and all is well.

Minstrel: Male tenor 20-35 The handsome narrator of the story, as well as in the musical story line. He becomes smitten with Lady Larken and tries to persuade her to flee to Normandy with him. He and the Jester join forces to stop the Queen’s plans.

Wizard: Male baritone 60-85 The egotistical, ex-performer who directly serves the Queen. He is the Queen’s Henchman and thinks of all the Princess’ tests. He prides himself in his position and basically obeys all of the Queen’s orders.

Lady Larken: Female soprano 18-27 Is the Queen’s Lady-in-Waiting but is put in charge of Princess Winnifred. She is madly in love with Sir Harry and desperately wants to marry him because she is pregnant with his baby. She tries to flee the Kingdom after having an argument with Sir Harry, but is convinced by Winnifred to reunite with him.

Queen Aggravain: Female alto 50-65 The loud, talkative woman who really rules the country. She is an overprotective, stubborn, sly Mom who is trying to keep her son, Prince Dauntless from getting married.

Prince Dauntless: Male baritone 22-35 A nice, not too smart, everyday type of young Prince who desperately wants to get married, but is prevented the strict tests that his mother gives to all potential candidates.

King Sextimus: Male mute 50-65 The Silent, kind, expressive, playful, and comedic character who is silent due to a curse placed upon him by a witch before the birth of Dauntless. He likes to chase girls through the corridors of the castle. Needs good improv skills.

Jester: Male tenor 25-40 An energetic and peppy man who is the King’s right-hand man and assists him with every endeavor. The Jester also plots with the Minstrel to spoil the Queen’s plans.

Sir Harry: Male tenor 25-35 He is the Queen’s Champion-in-Arms – the Lancelot of Knights – the macho, slightly egotistical, brave, romantic knight who decides to leave the kingdom to search for a princess, and finds Princess Winnifred in the swamp. Easily jealous, but loves Lady Larken with all his heart. Harry cannot marry Lady Larken until Prince Dauntless has found a suitable bride.

Princess Winnifred the Woebegone: Female Mezzo – good belt 20-30 A feisty, outspoken, independent, strong, optimistic, and free-thinking princess from the swamp lands. She isn’t too good with manners. She wants to get married, but must go through one of the Queen’s unfair tests. The Prince Dauntless, naturally, falls madly in love with her.

Sir Studley: Male 25-45 A member of the court who dances.

Nightengale of Smarkand: Young Adult, must be able to whistle. A royal pet that sings a lullaby to put Winnifred to sleep.

Princess No. 12: Female 16-25 She is the first Princess that the audience sees who is performing the rounds of tests. Very eager, smart, thinks well on her feet – of course the Prince wants to marry her.

Ensemble: The Ladies-in-Waiting and Knights and are all waiting for the Prince to get married so that they can get married to each other. These are character roles and are not just part of the chorus. 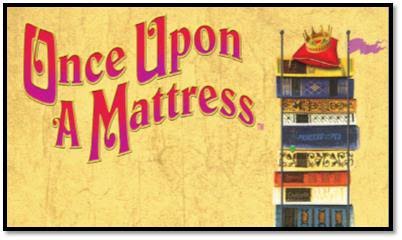 Please submit to: The show has an online audition form, see address above. For more info contact portwashingtonplaytroupe@gmail.com

This casting notice was posted by: Port Washington Play Troupe