Last year, Dolly’s “Coat of Many Colors“  TV movie premiered on NBC.   Last year the production also announced that “Coat of Many Colors” would be the first film in a series based on Dolly Parton, her childhood memories and her music. This summer, the next movie in the series is filming.  The Dolly movie is in production in the Atlanta area and has a casting call out for babies and kids. Specifically, Atlanta CL Casting is looking to cast twins and triplets babies between the ages of 15 and 18 months. Also, they are seeking elementary school kids ages 6 to 9.

The movie series follows the true story of her hard-scrabble upbringing in Tennessee’s Great Smoky Mountains, famously immortalized by her song.  Dolly is serving as executive producer on “Coat of Many Colors”, and the second installment of the TV film series should premiere on NBC during their fall 2016/2017 season. 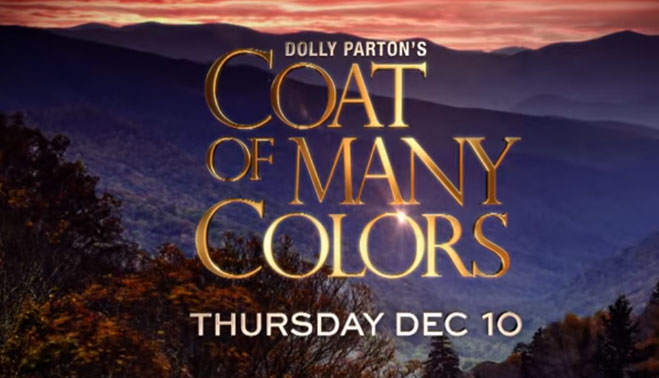 “Coat of Many Colors” is an autobiographical song which Parton composed while traveling with Porter Wagoner on a bus in 1969. Due to a lack of paper on the tour bus, Dolly wrote the song on the back of a dry cleaning receipt from one of Wagoner’s suits. After the song became a hit, Wagoner had the receipt framed. Dolly Parton recorded the song in 1971, making it the title song for her Coat of Many Colors album.

The song describes her childhood. Dolly was one of 12 children born to a sharecropper in Smokey Mountain region of East Tennessee. They all lived in a home that had no running water or electricity. Dolly Parton kept the original coat, now on display in her Chasing Rainbows Museum at Dollywood. Mr. Wagoner (owner of the dry cleaning receipt that the song was written on) also donated the framed receipt to the museum.

Please only apply if you live in Atlanta and fit the criteria. Currently, the show is only interested in twins & multiple babies. The reason for that is that babies are not allowed to stay on set for too long, therefore productions use twins and multiples so one child can substitute on set for the other. So, please do not submit individual babies

COAT OF MANY COLORS 2

BABY TWINS OR TRIPLETS
Seeking baby twins or triplets between the ages of 15-18 months. Should have blonde hair and blue eyes. Please include photos of them together and individual photos and please specify who is who in your submission. Also include your name and current phone number when submitting your babies.
Subject: COMC BABY

Rate: $120/8 each child
Filming will be July 18th-Aug 12th. Should have open availability, but you will only work SOME of these days.

SCHOOL KIDS
The school bell is ringing and class is about to begin! We are seeking Caucasian kids between the ages of 6-9 years old. This is for boys and girls. If you can submit in ‘1950’s poor country clothes and hairstyles’, it will definitely be a HUGE plus and increase your chances! Make sure to include your name and current phone number when submitting your child.
Subject: SCHOOL KIDS

Rate $120/8
Filming will be July 18th-Aug 12th. Should have open availability, but you will only work SOME of these days.

Be sure to also check out all the other great shows and productions now casting talent in the Atlanta area.

Check out the trailer for Dolly’s “Coat of Many Colors”