Fox’s talent show “The Four” is now casting for season 2.

Get on The Four – The show is holding online auditions now and they are open to talent nationwide.

Seems that FOX has renewed it’s talent competition, The Four, for a second season. The FOX Network announced that the show would be picked up for another season before the Season 1 finale of The Four: Battle For Stardom. That’s right, Fox that the singing reality TV show is coming back and they did so prior to even announcing the fate of one of their own.

The show features music industry pros such as Sean Combs, DJ Khaled and Meghan Trainor. While rumor has it that 3 of those 4 judges will be back, FOX has yet to announce it. However, the show is now casting talented singers coast to coast who would love a chance to auditions for a coveted spot on the primetime singing competition. The show is also hosted by pop superstar Fergie.  Now, Charlie Walk, one of The Four judges, did get into some trouble in the past weeks and will not be coming back.  The show has yet to announce his replacement.

The show is new to FOX and actually just came out 2 months back. The Four premiered on FOX on January 4th and quickly became one of FOX’s highest rated unscripted shows.  The show only ran for 6 weeks and ended with the finale on 2/8/2018.  No word yet as to how many episodes season 2 will bring as of yet.

The Four is a singing competition with a huge prize on the line for the winner… a record deal with Republic Records. The premise of the show is that the singer winning the competition will have an opportunity to be mentored by the panel of four music moguls with the goal of the winner becoming a music star… with their help.   The show takes on the last standing reality format in which singers fight it out on stage. 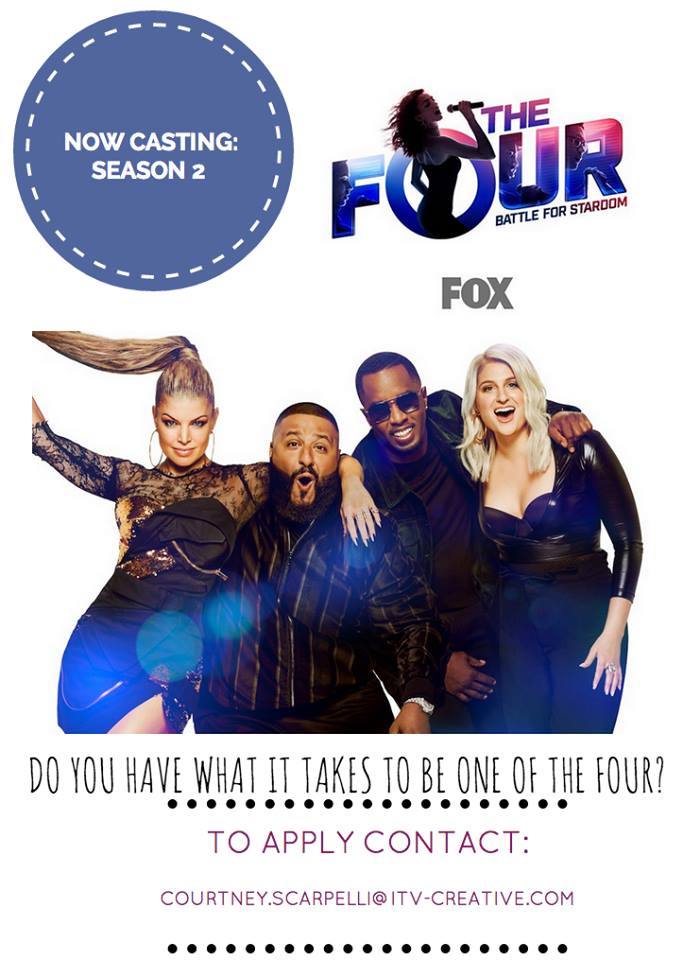 According to the FOX description of the show, auditions are open to pretty much anyone… challengers could be fans who had been sitting on a couch one week, and singing onstage the next. Viewers who think they’ve got the talent to compete and unseat the four singers onstage will have the opportunity to submit an audition video. America will have the chance to decide who is brought onto the show by voting on the available streamed auditions and influencing which challengers will take on THE FOUR and shake up the competition.

If the existing four singers outperform their challengers, then they survive to sing another week, until the end of the season, when the singers have safely secured their spots on stage and face off against each other, resulting in one being named the winner.

Read on because the show is now taking video auditions.

Does your voice stop a crowd? Prove it! Film yourself singing whatever you want, wherever you want and post it across social. Be sure to challenge 4 of your friends and include #TheFourChallenge in your post. Do you have what it takes to battle for stardom?

Casting directors for the music show have created an online process for those that would like to tryout.  Check out this page for all the details.