Before The Horse Entertainment is currently casting for a March production of George Bernard Shaw’s Pygmalion – www.pygmalionplay.com, directed by Duane Langley. Auditions are November 19th & 26th. This is a compensated acting opportunity.

Please bring a headshot and resume, if possible. Auditions will consist of readings from the script. Sides are available. Any questions please contact pygmalionplay@gmail.com or 401-269-8308

This production is a new adaptation for the stage, with a focus on using what is available to us in the theatre today, while remaining as genuine as possible to Shaw’s original text. This is NOT My Fair Lady, this is Pygmalion. We are seeking an ensemble of actors with a dedication to movement and great facility with accents. Actively seeking all ethnicities for all roles. For more information, visit [http://pygmalionplay.com/index.php/audition/]

The roles are as follows:

Eliza Doolittle – a common flower girl from Lisson Grove, feral and feisty, all instinct, determined to better herself and not get kicked in the process. She is a strong-willed street urchin whose journey to a more refined young woman has many stops along the way, from the patina of elegance that hasn’t become inherent (a crust of civility over the street-smarts, a now proper accent employed on some very improper speech), to an educated, far-seeing young woman who suddenly discovers both longing, other ambitions, and appetite, along with a new understanding that far from being elevated and set free she has simply exchanged one kind of box for another.

Mrs. Pearce – the long-suffering housekeeper for Henry Higgins. Tart, can be intimidating, keeps his house running amid the chaos, but can also be charmed by her irascible, unpredictable boss. She waivers between horror and wild pity for the waif of a young woman who has been thrust under her roof. Alfred Doolittle – Eliza’s father, a dustman, a cockney rogue, cocky, brilliant in his own understanding of his own morality and code of ethics, exceedingly clever with language and the cat who always lights on his feet, proud of being one of the undeserving poor, and as a result, finds himself elevated to middle-
class respectability with, to him, horrifying consequences.

Mrs. Higgins – Henry’s mother, wise, intelligent, with a wry, dry sense of humor, she is herself broad- minded in her thinking, but likes to observe societal conventions and is constantly challenged by her son’s unconventional, occasionally boorish ways. Not above going against her son when his blind arrogance deserves it.

Mrs. Eynsford Hill – financially of the middle-class, but perhaps used to belong to the upper class, and still behaving as though that’s her milieu. She longs to still be part of good society, and her financial strictures very much get in her way. The mother of Freddy and Clara, she is trying to do her best for her children, with great compassion for their youth and situation.

Freddy Eynsford Hill – somewhat bumbling, ineffectual, but charming in an earnest, young gentlemanly British sort of way, henpecked a bit by his sister, eager to please, well-meaning, eventually bowled over and utterly charmed by the vision that is the new Eliza Dolittle.

Clara Eynsford Hill – the daughter of Mrs. Eynsford-Hill, she feels the financial restrictions keenly and this constant need to grasp for what they can’t quite reach makes her shrill, occasionally unkind, and preoccupied with fitting in with the latest trends in both society and fashion. By turns petulant, yearning, snobbish, and gullibly charmed.

George Bernard Shaw – known at his insistence simply as Bernard Shaw, was an Irish playwright, critic, polemicist, and political activist. His influence on Western theatre, culture, and politics extended from the 1880s to his death and beyond. Born: July 26, 1856, Portobello, Dublin, Ireland Died: November 2, 1950, Ayot Saint Lawrence, United Kingdom

Ensemble – two men and two women to play bystanders, servants, and others of various classes, ages – so facilities with accents and characters a plus.

The roles of Professor Higgins and Colonel Pickering have been Cast.

Note: Shaw’s Pygmalion is widely available in print or online. There are also film versions available on YouTube, etc. if you’re looking for film/video.

If you’re interested in any positions on our Production Staff, visit www.PygmalionPlay.com

City or Location of call: Providence, Rhode Island
Please submit to: pygmalionplay@gmail.com by 2019-11-05

This casting notice was posted by: Before The Horse Entertainment 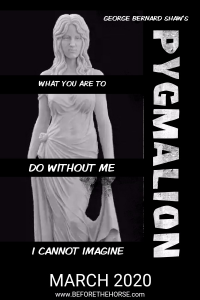 One thought on “Theater Auditions in Providence, Rhode Island for “Pygmalion””