Would you like to be cast on a brand new game show that may give you a chance to win some big cash?

If so, NBC’s new gameshow “Small Fortune” may want to hear from you. NBC is looking to film 6 episodes of the new reality TV game show. “Small Fortune” is based on a popular ITV series that was launched in the UK and NBC plans on bringing this show to the US.
LOS ANGELES! NBC’s “SMALL FORTUNE!”  is now casting.

We’re looking for close-knit teams of THREE with BIG dynamic personalities in SoCal!

About the show…
Small Fortune will see teams of three friends compete in the tiniest of challenges for a chance to win big money. From a shrunken Oval Office (“The Waste Wing”) to a mini Arc de Triomphe (“Arc de Wee-Omph”), each team must prove their skills on playing fields the size of a dollhouse. Challenges will require considerable dexterity and intense focus, because with games this small, there’s no room for error – the slightest miscalculation or tremble may result in elimination.

To take home the ultimate Small Fortune, teams that make it to the end must tackle one last teeny-tiny but epic game. If players can control their nerves and avoid the slightest mistake, they will walk away with a big cash prize. – NBC

As the saying goes, good things come in small packages. 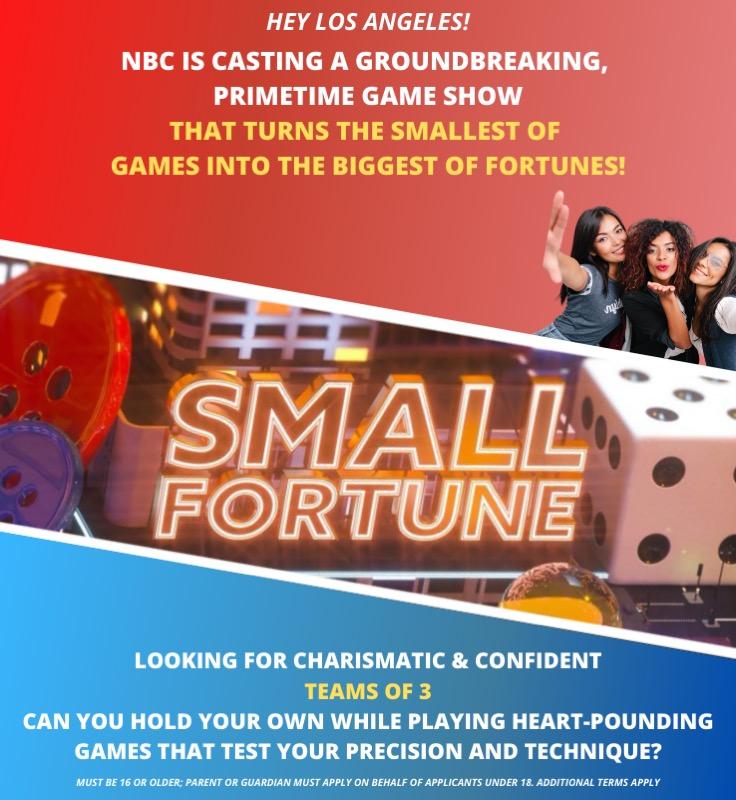