Update – If you are interested in the roles but have yet to submit, you’re in luck…. The deadline to audition for the movie has been extended to the 17th of July.

The film has 4 main child / teen roles up for grabs and talent may still audition online.

“The Conjuring 2: The Enfield Poltergeist”  is casting a child lead role and 3 other supporting roles for kids and teens.

“The Conjuring 2” is having a nationwide talent search for a new set of siblings to be haunted by evil spirits and kids nationwide have a shot at a major film role. The sequel to the popular Horror film is now in pre-production and has plans to film the sequel in England and Los Angeles. The Warner Bros movie is casting for the roles of 4 siblings, 2 boys and 2 girls. Production is scheduled to begin this summer and kids / teens wishing to try out for the movie roles do not need any previous acting experience or agency representation. Please see the role breakdowns below as well as the instructions on how to submit for the film.

In the original film, Patrick Wilson  and Vera Farmiga  star as Ed and Lorraine Warren. According to the film’s IMDB page,  Patrick Wilson  and Vera Farmiga will be returning for the horror sequel.  The couple were  paranormal investigators whose reports inspired the Amityville Horror. The Warrens come to the assistance of a Rhode Island family who reported experiencing paranormal disturbances in their farm house. Ed and Lorraine come to find out that the property was once home to an accused witch by the name of Bathsheba. They soon realize her evil spirit may still live on the property.

JANET HODGSON
AGE 11 · CAUCASIAN
She is a thoughtful and curious girl from Enfield, London. Working class. We are looking for an exceptional child with emotional intelligence for this role. London or standard British accent.
She must be able to handle dialogue and convey strong emotions.
LEAD ROLE

BILLY HODGSON
AGE 8 · CAUCASIAN
Billy is the youngest of the Hodgson siblings and suffers from a stutter. He is cute and playful – the baby of the family. London or standard British accent.
He must be able to handle dialogue and convey strong emotions.
GREAT SUPPORTING ROLE

MARGARET HODGSON
AGE 14 · CAUCASIAN
Margaret is the oldest Hodgson child. She is a sympathetic and supportive young woman. She is academic and mature. London or standard British accent.
She must be able to handle lots of dialogue and convey strong emotions.
GREAT SUPPORTING ROLE

JOHNNY HODGSON
AGE 10 · CAUCASIAN
He is quick witted and picks fights with his siblings. He is a good footballer – boyish. London or standard British accent.
He must be able to handle lots of dialogue and convey emotion.
GREAT SUPPORTING ROLE 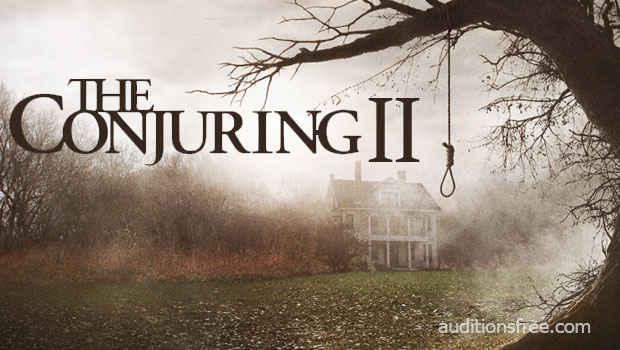 WE ARE LOOKING FOR 4 INCREDIBLY TALENTED CHILDREN FOR THIS EXCITING FILM.

The movie auditions for kids are being done online, through the cast it system. Talent interested in the roles will need to record a video audition. No previous acting experience is required. Also be sure to check out all the other projects that may be casting kids and teens.

Those interested in applying can see this page for the online submission form and further instructions about uploading your pictures and videos. Please note that the new deadline to get your video auditions in is the 5th of next month.

Before there was Amityville, there was Harrisville. Based on a true story, “The Conjuring” tells the horrifying tale of how world renowned paranormal investigators Ed and Lorraine Warren were called upon to help a family terrorized by a dark presence in a secluded farmhouse. Forced to confront a powerful demonic entity, the Warrens find themselves caught in the most terrifying case of their lives.