I am a film student at the University of New Haven and I am currently looking for Actors and Extras for a short film that will be shooting in April.

We will be holding auditions on Saturday February 25th at The University of New Haven from 11- 4:30. (Auditions are by appointment)

Ethan, a recent college graduate and intern for the San Francisco Chronicle is a kind and respectful person. However, his anxiety has always held him back as well as made it difficult for him to maintain confidence in a romantic relationship. Jackie is the first person in his life that encourages him to try things out of his comfort zone. Even though they have only been dating for a few months, Ethan felt as though Jackie would be what helps him ultimately overcome his issues. When Ethan discovers something about Jackie that makes him question her intentions, he is forced to reevaluate their relationship.

Jackie a college student and hopeful actress exudes more confidence and assertion then Ethan has ever witnessed. Her polite yet honest perspective creates an environment where even Ethan can feel safe enough to make jokes and ask personal questions. Despite her confidence, she is very modest when discussing her abilities as an actress and unlike Ethan she has a very strong and personal relationship with her family.

Garrett is Ethan’s pessimistic and lazy older brother. Due to Garrett’s volatile nature he is incredibly defensive when discussing his gross habits. After getting dumped by his girlfriend Julie, he enters a state of self loathing and depression. Jealous of his younger brother’s beautiful girlfriend, he argues in favor of Ethan ending his relationship with Jackie.

Julie is a waitress at the restaurant Ethan frequents. Despite being a good person, she is fairly self absorbed. Once Julie and Garrett break up, she starts to take her anger out on Ethan whom she frequently serves at the restaurant.

Margret is Jackie’s kind and affectionate mother, the moment that she meets Ethan she hugs him without considering whether or not it is warranted or asked for.

Keith is Jackie’s confident and somewhat intimidating father. From the moment he meets Ethan he treats him as an equal. Ethan finds this jarring and has trouble deciding how to to talk to him.

Riley is an rude and hostile girl. After wandering around the restaurant, she picks Ethan to make fun of and comments on his physical appearance.

Rileys Mother is an extremely passive and ineffective parent. After realizing Riley approached Ethan just to insult him she fails to even get her daughter to apologize.

All headshots, reels and resumes should be sent to this email ( brunchfilmproduction@gmail.com)

I am including a link to the production website where you can find character descriptions as well as more information about the film. I have also attached a flyer as well. 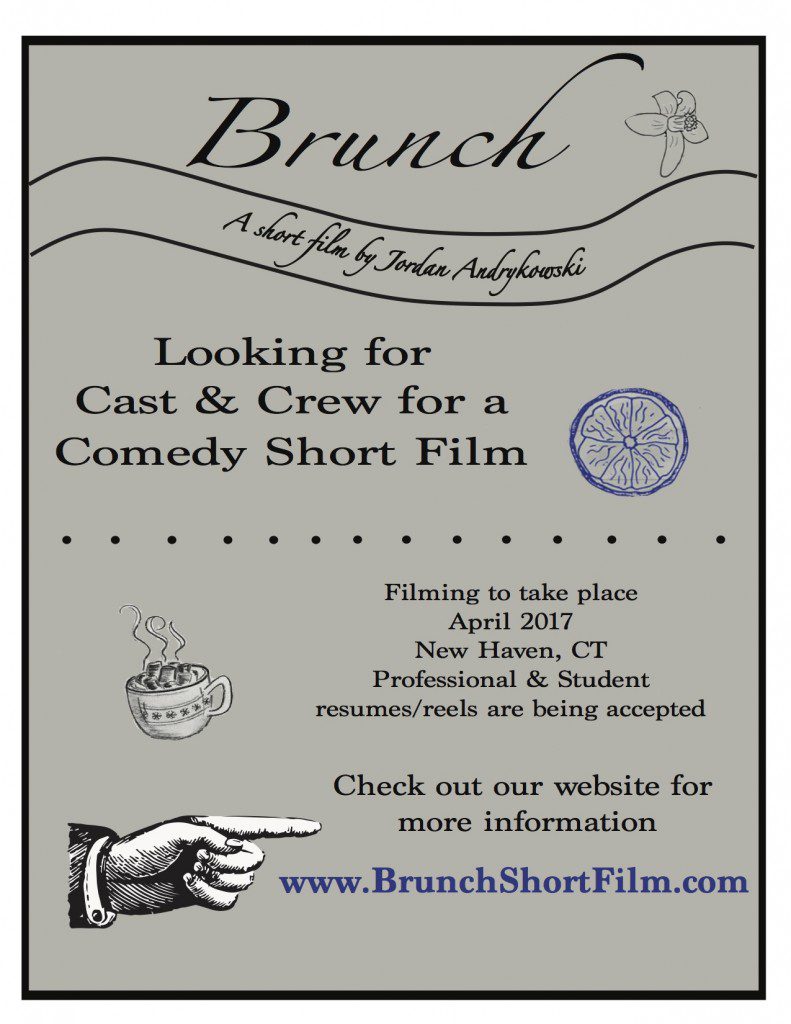 City or Location of call: West Haven CT
Please submit to: Brunchfilmproduction@gmail.com by 2017-02-22

This casting notice was posted by: Pathological Films