Mississippi Open Casting Feature Film “Dirt Road Mississippi” Casting:(Paid) We are looking for some experienced talented actors to join us on this passion project. #DirtRoadMississippi is not just a film but social movement.

STORY LINE: Based on true events. Earl “Bird” Jennings is falsely accused of murdering two affluent white students in a small Mississippi town in 1982. A rookie attorney fights to prove Bird’s innocence against a racist sheriff, a relentless prosecutor, and an all-white jury… #SayHisName #WillieManning 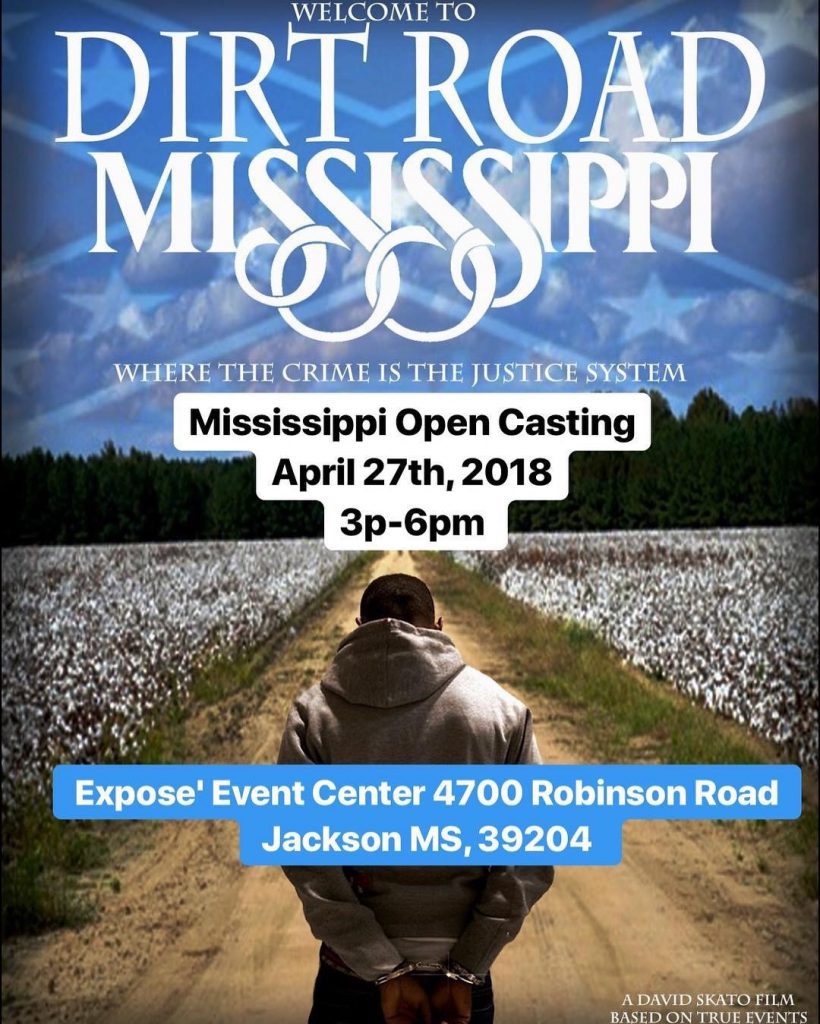 (There will be plenty of supporting roles and extras)

[EARL BIRD JENNINGS]18-25 year old African American male, high spirited but a little rough around the edges. His mother has been in and out of prison since his birth. He was taken in by his grandfather at an early age and raised in a neighborhood of gangs, but somehow managed to steer clear of the worst. Bird learned to be tough. One day his life changed and he had to say goodbye to his freedom. Bird is currently incarcerated and on death row in his small Mississippi town for a crime he never committed…LEAD

[JUSTINE AGNEW]50s-60s, the first and only female African American attorney to have a private practice in “Dirt Road” Mississippi. She has survived the inequality of the civil rights movement and stood proud with Dr. King in Selma. She believes that winning one fight at a time is how you win the war. Even if those little fights are in a town no one has ever heard of…LEAD; SUBMIT OFFER ONLY, NAME ACTORS.

[CHARLES “POP” JENNINGS]African American male, Bird’s ailing 70s-80s grandfather and one of the most charismatic old men you will ever meet. He has a bald head, no facial hair and long white eyebrows that almost make him look like a wise owl. Pop moves a bit slow because of a mild stroke but truth be told it’s because he used to pick cotton and soy beans 14 hours a day and spent 57 years in prison. His slender frame insights pity, but his conversation makes you realize that he’s stronger than most…LEAD; SUBMIT OFFER ONLY, NAME ACTORS

[RAY DANSON]30s, Caucasian male, a hard-nosed and hard to read prosecutor with a thick southern dialect. To the unsuspecting, he sounds like a plantation owner but doesn’t do anything that anyone would deem racist. His slick talk and arrogant walk symbolizes what people relate most about the south. His family’s roots go deep deep into the controversial South and the KKK. His small town in Mississippi is aware of his family’s legacy and how he easily became the town’s only prosecutor…LEAD. SUBMIT OFFER ONLY, NAME ACTORS

[SIDNEY LIVINGSTON]30s-40s African American male, a seasoned attorney from Boston who recently accepted an offer to join Justine Agnew as a partner in her law firm. Sidney doesn’t yet understand the ways of the South and honestly believes that the courts in Mississippi are fair just like they are in other cities…LEAD

[SHERIFF PARSONS]50s, Caucasian male, the typical Jim Crow South white man who believes black people are less than people. He and all his family were official members of the KKK before it was disbanded two years before. His father is widely known and celebrated for being at the helm of lynching dozens and dozens of black men throughout the South…SUPPORTING

[SHAWN]African American Male 20s, Bird’s best friend until cops threaten him with jail time if he doesn’t lie on his friend…SUPPORTING

[JUDGE]Caucasian male, 50s to 60s, a no holds barred type of Judge who has only sided favorably to white people…

[LENA]African American female 19-25 years old, gorgeous and smart. Bird’s girlfriend and best friend. She knows Bird is innocent but what can she really do in a small town in Mississippi where black voices aren’t heard…

This casting notice was posted by: Moses Jean-Pierre