Auditins for “Murder By Natural Causes”

Sam Bass Theatre, the premiere theatrical venue for Round Rock, Texas, is pleased to announce auditions for “Murder By Natural Causes”, a stylish and witty suspense-thriller by playwright Tim Kelly. Roles are available for four women and four men. Auditions, which will consist of cold readings from the script, are set for 7:30 p.m. Sun., Jan. 13 and Mon., Jan. 14 at the theatre, located at 600 N Lee St. in Round Rock. If available, actors are welcome to bring their headshots and résumés; no appointment is necessary.

The plot centers around Arthur Sinclair, a world-famous mentalist, and his wife, Allison, who is planning to murder him. With the aid of a struggling young actor, Allison hatches an ingenious, seemingly foolproof scheme — but is it? How do you murder someone who might possess genuine psychic gifts? The smart script is loaded with unexpected shocks, double-crosses and twists. 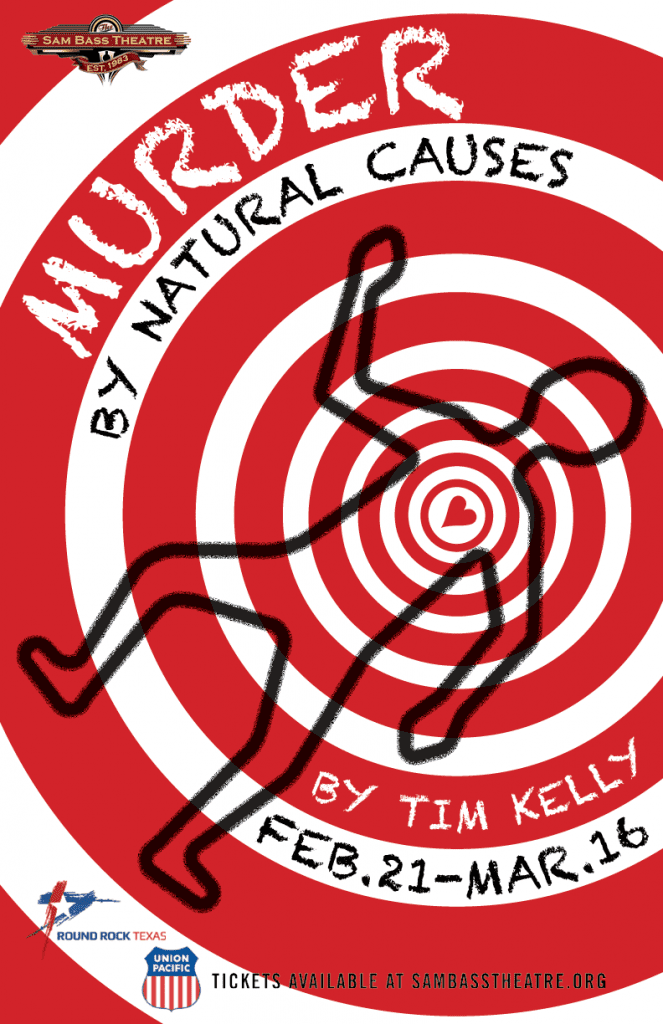 Roles to be cast are:

GIL WESTON, a good looking actor in his mid- to late-20s, charming and arrogantly self-interested. He can be captivating and irresistible, but also impulsive and violent.

ALLISON SINCLAIR, a beautiful, sophisticated woman in her 30s or 40s. Her cool poise and intelligence hides a ruthless and potentially lethal selfishness.

ARTHUR SINCLAIR, Allison’s husband, is a very fit, worldly man in his 40s or 50s. A famous mentalist and author who writes books on psychic phenomena, Arthur regularly makes the rounds of the late-night talk shows. He is charming, but shrewd, with a somewhat theatrical manner.

GEORGE BRUBAKER is Arthur’s attorney. In his 40s or 50s, George is pragmatic and businesslike.

JESSICA PRESCOTT is an upbeat woman and book editor in her 30s, who presses Arthur to increase his output.

EDDIE OAKMAN is a former alcoholic and current private detective aged anywhere from his 40s-60s.

MRS. CARRINGTON is a middle aged concert promoter who tries rather unsuccessfully to act younger than she is. She hopes to sign Arthur to a world tour.
The play will be directed by Dale Roe, a theatre veteran new to the Sam Bass who founded Chicagoland’s popular Gag Reflex sketch comedy ensemble and its Austin offshoot, which performed throughout central Texas for a decade in the early 2000s.

“What attracted me to this script,” Roe says, “is how smart it is. I read through dozens of popular and obscure mystery plays and found most of the scenarios to be outrageous with very broad and unrealistic characters. Kelly’s script, in contrast, is grounded in reality despite its apparently supernatural subject matter, and the characters talk and behave like real people — awful people, some of them, to be sure. But, real. Everything that happens in this play could happen in real life.”

Rehearsals will begin in late January and continue through opening night, Feb. 21. The production runs at 8 p.m. Thursdays-Saturdays and 2 p.m. Sundays through Mar. 16.

This casting notice was posted by: Sam Bass Theatre