So, how is your luck? Do you seem to be incredibly unlucky lately?

A new show is holding a casting call for the most unlucky folks in America. The show is looking for Americans that would love to travel oversees to see if their own luck would change with the change of scenery.  The new reality competition which is currently called “Just My Luck,” is looking for the unlucky who are willing to embark on an adventure in order to change their lives, and their own luck.

Do you have the worst luck of anyone you know? Are you always spilling coffee, burning toast, getting fired, coming in last, getting rejected, losing things, etc

A brand new show for a major network is looking for AMERICA’S MOST UNLUCKY people. Unlucky strangers will embark on an epic overseas adventure where hopefully, they’ll get lucky (in more ways than one ).

Are you up for a challenge? Willing to do anything to change the crummy cards you’ve been dealt?
Apply now!

https://justmyluck.castingcrane.com
Candidates should be US or Canadian citizens between the ages of 21-45 and with a passport! 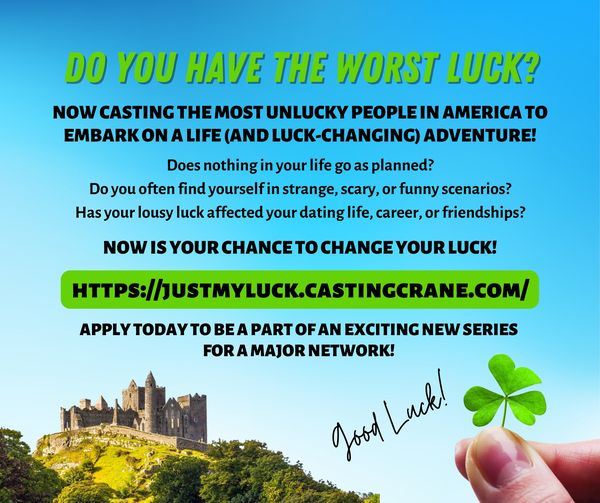