K-pop and fans of the seven member Korean pop boy group Infinite now have a chance to see them live in a MTVK show! 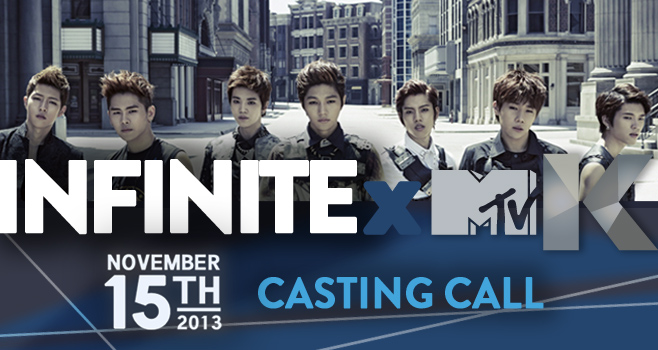 MTV is casting Infinite superfans, or ‘Inspirits’ (Infinite’s fan club name is ‘Inspirit’) in New York city for a live taping. The music network is looking for 100+ fans to fill the venue and a few lucky fans may even get a chance to interview their pop idols on camera.

This is an exclusive event and tickets are only available through a casting call. It is so exclusive that those cast for the show will not be allowed to bring a friend. If you would like to go with a friend, your friend will need to follow the same procedure to try to get cast for the show.

We’re casting 100+ fans (Inspirits) to be a part of this exclusive live taping. MTV K will also select a few lucky Inspirits
to ask Infinite an interview question directly, so send us your most creative questions!

To be considered to attend you must email to casting.mtvk@gmail.com

You must include the following information:

Please note that if multiple people want to go, each must send an email of their own.
SUBJECT LINE OF EMAIL: INFINITE CASTING CALL APPLICATION

MTV K is a subscription MTV channel that focuses mainly on Korean pop music or K-POP. The channel is an English language network but has a global following and a global reach.

MTVK is based in New York City where this special show will be taking place.