The show’s casting directors will be coming to the Pocono Downs in PA next month to hold tryouts for the next season of the hit reality competition. The event will be held at the convention center on the 17th. If you think you have what it takes to outwit, outplay and outlast the rest of the competition, come on down to the live auditions for a shot to get on Survivor and a chance at the huge prize of $1,000,000.

Every season 18 castaways compete against each other on SURVIVOR. The Emmy Award-winning series just returned a few weeks back and is already looking ahead to next season. The Wednesday night show has been a staple of reality TV for many, many years and seems to be still going strong. This years Survivor is themed “Blood Vs. Water” and features couples with pre-existing relationships such as mother / daughter, husband / wife and brother / brother. The couples are split between tribes and must not only outwit, outplay and outlast the other competitors, but each other as well.

Emmy Award winner Jeff Probst hosts the show and coordinates the challenges and votes that will eventually crown one competitor the ultimate survivor. 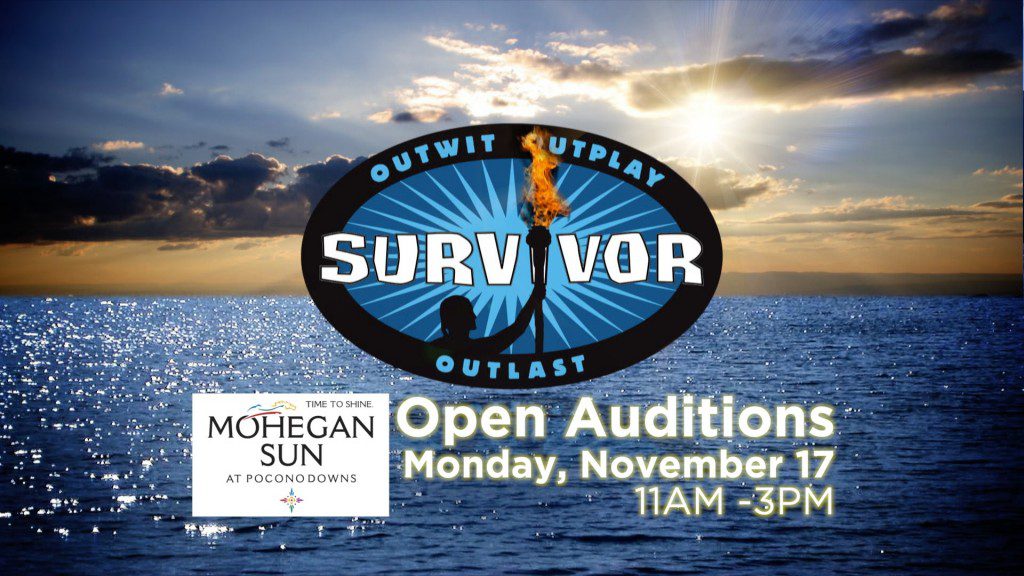 The Survivor auditions for the 2015 season will be held at the Mohegan Sun at Pocono Downs. Catch the  Survivor  casting call on Monday, November 17th in the Convention Center.

Do you have what it takes to be the next Survivor? If you think you can outwit, outplay and outlast your competitors, join us for CBS’ Survivor open casting call at Mohegan Sun at Pocono Downs on Monday, November 17th from 11:00am to 3:00pm. Don’t miss your chance to become a castaway in the running for 1 million dollars!

Participants cannot line up until 5:00am the morning of the event. Eligibility requirements and applications are available at http://www.pahomepage.com/casting-call-survivor.

Be sure to check out the CBS Survivor tryout section to see past and future casting call events for the show.