Ewan McGregor’s ‘American Pastoral‘  is in production this fall in the Pittsburgh area and now casting extras.

Ewan McGregor is both starring in and directing the film which is based  Philip Roth’s Pulitzer Prize winning novel.  Ewan McGregor, Jennifer Connelly and Dakota Fanning will star in the film that  follows Seymour “Swede” Levov, a man with a seemingly perfect life. Swede is an athlete who marries a beauty queen and inherits his father’s business. The family’s seemingly perfect life gets ripped apart when their daughter becomes involved in political terrorism during the Vietnam War. In protest against the “system”, Swede’s daughter plants a bomb in an old post office which kills an innocent bystander.

‘American Pastoral‘  is being produced by Lakeshore Entertainment with a screenplay written by John Romano.  Lakeshore’s CEO Tom Rosenberg and Gary Lucchesi are producing the project.  Lakeshore is no stranger to Roth’s work. This will be the third Roth adaptation Lakeshore has produced.  Lakeshore produced ‘The Human Stain,’ which starred Anthony Hopkins and Nicole Kidman as well as ‘Elegy,’ with Penelope Cruz and Ben Kingsley.  According to Variety, the project has been in development for over a decade. Lakeshore first attempted to develop the project back in 03. 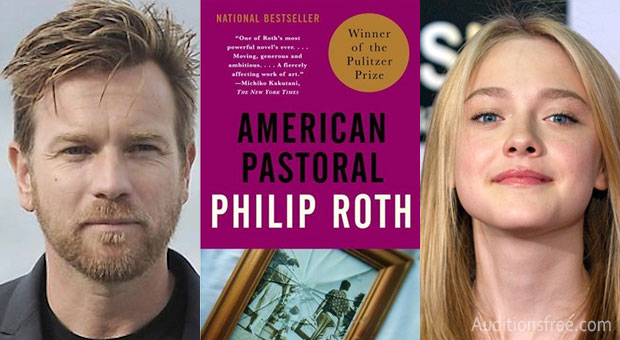 Extras should ALWAYS be available 12-14 hours. Pay is $7.25 per hour for the first 8 hours and time and a half after that. Should have reliable transportation, filming in the Pittsburgh area. Must be OK with filming outside!

Hair is very important on this film. The decades featured did not have shaved heads, braids, twists, dreads or mullets. Also must be willing to have facial hair trimmed if needed to fit the time period.
Everyone MUST be able to attend a wardrobe fitting.

EVERYONE MUST BE 18+ YEARS OLD.

Who’s needed?
-Men and Women, any ethnicity. Put “TUESDAY NOV 3” in the subject line when submitting.

If interested and available, please email a CURRENT photo to mosserextras@gmail.com. You should be looking at the camera in the photo. No hats or sunglasses. Photos should be full-length or from the waist up.

Please include your name, age, location, phone number and sizes. For Men that means height, weight, waist and suit size. For Women, height, weight, dress/pant and waist if you know it.

We will notify you if you if we are able to use you.

The movie is filming in the Pittsburgh area, so please only apply if you are local.