STORY: Daniel, a mourning divorcee, boards a train where they encounter a near-perfect copy of themself, who seems to be involved with his son’s passing.

CAST: [DANIEL] Early 30s. Tired, stubborn, and sullen, Daniel has taken it upon themself to be the “strong one” in any given situation, the one who can take whatever the world throws at them. Daniel’s thickheadedness was a great factor leading to their divorce, and the reason they decided to never see their ex-husband again after attending their son’s wake. On the train ride over, however, they encounter a near-perfect doppelgänger, who wants to fully assimilate Daniel’s form, completely replacing them. Daniel is now faced with a dark, life-threatening reflection of all their faults and shortcomings. LEAD (1)
[THE PRETENDER] Early 30s. Sadistic, Cunning, and Identical to Daniel, The Pretender has been stalking Daniel for the better part of three years. The Pretender’s race comes from a world that lacks Earth’s physical and social beauty and resent humans for wasting it. The Pretender views humans like Daniel, people who crave conflict at any cost, to be unworthy of Earth’s gifts, and think that their race will make better use of it than humans ever will. The Pretender must, however, first observe Daniel’s reactions to certain emotions to better mimic and replace him, and he has only two left to replicate: grief and despair. LEAD (1)
[JOSH] Mid 30s. Grief stricken, exhausted, and aggrieved, Josh’s interactions with Daniel post their son’s death are short, formal, and usually end in a fight. Josh comes from a wealthier-than-most English family and has arranged passage by train for their American ex to attend their son’s wake. Done with the fighting and done with the pain, Josh wants this to be the last time Daniel and them ever have to meet. SUPPORTING (1)

Hi everyone!
My name is Sanath Hegde, and I am the casting director for the UNCSA third-year film Pretenders. We are currently casting our one lead and one supporting.
If you are interested in auditioning for these roles, please email pretenderscasting2022@gmail.com
Union / Non-Union: Non-Union
No Compensation
Student Film
Shooting Location: Winston-Salem, NC
Shooting Dates: January 28th-30th, 2023

If you are interested in auditioning for these roles, please email pretenderscasting2022@gmail.com

This casting notice was posted by: Sanath Hegde 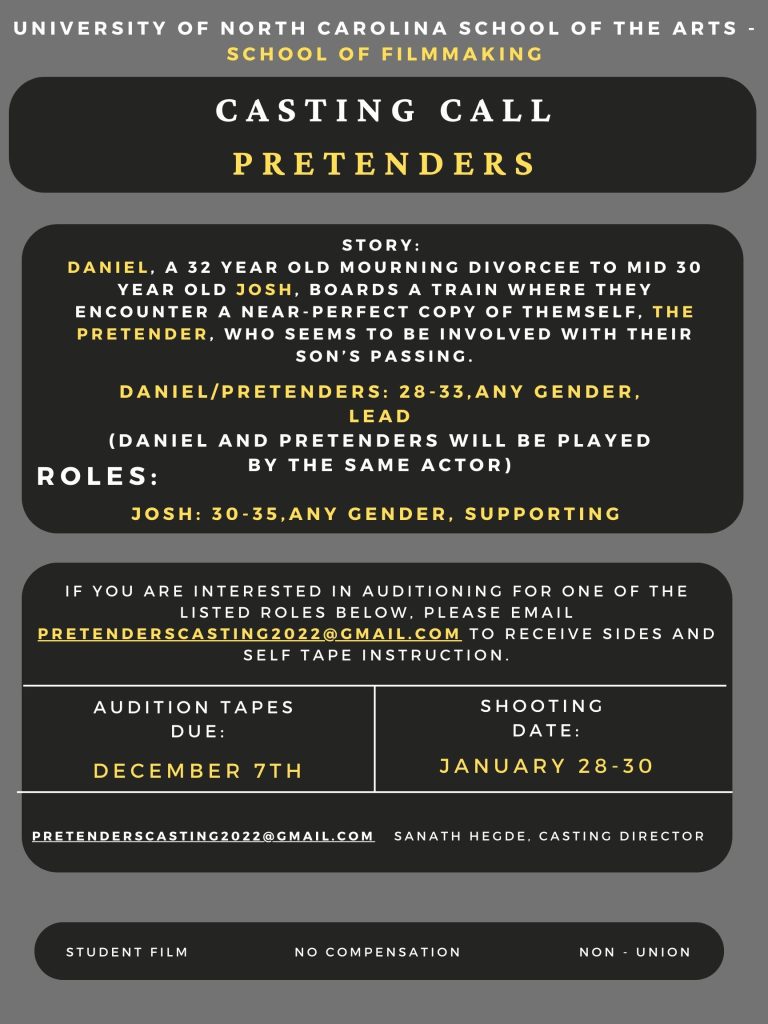