Marian Lost in Fiction at Fringe

Auditions will be held January 7th-8th from 7:30 PM-11:30 PM where we will see people on a first come first served basis for individual auditions and the 9th at 3:30PM for dance and callbacks.

Marian, Lost In Fiction is a 60 minute musical that tells the wonderful adventures of Marian, an assistant librarian. One night a violent storm mixes up the stories in the great story book. Now it is up to Marian, and her guide the Cheshire Cat, to find all the characters and get them back to their correct story. Join them as they adventure through Hogwarts, the Arena, Neverland, Westeros, Longbourn, and Oz. See your favorite characters from The Hunger Games, Harry Potter, Peter Pan, and many more join forces. And cheer for Marian as she discovers who created the storm and fights to take them down. The show is written and produced by Phoenix Tears Productions. It is an original script with musical numbers parodied from Broadway tunes.

At the audition the 7th or the 8th have prepared a 1-2 minute monologue and approximately 30 seconds of a song to be performed with an instrumental CD you provide or acapella . Backing tracks with vocals will not be allowed nor will there be an accompanist available. Also please bring a resume and headshot if you have them.

The second day, the 9th, will involve a dance so please where the appropriate comfortable clothes. Character or jazz shoes are appropriate but no required; just be comfortable and ready to move. Callbacks will be held on the 9th after the dance call. Callbacks will include anything and everything from singing with partners, doing scenes from the show, and working with returning cast members. There is nothing to bring in for callbacks so just be ready to work.

If you have questions or conflicts with these dates please email us: phoenixtearsproductions@gmail.com 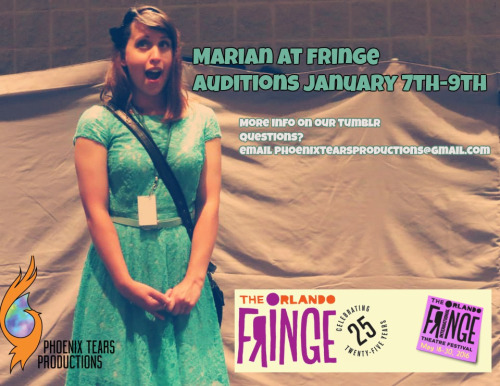 Currently we are holding auditions for this production for the following roles:

Rehearsal demands will be weekly at most in months leading up to fringe and very heavy in May of 2016.

City or Location of call: Orlando
Please submit to: Fill out this if interested- https://docs.google.com/forms/d/1PNEiMKCqB8D4_Bpf3tCp0U5mGJ1eDq4uJthLY0iW3tI/viewform?c=0&w=1&usp=mail_form_link by 2016-01-08

This casting notice was posted by: Phoenix Tears Productions