A Gentleman, A Lady, and A Thug.

Mia just graduated from Law School. She and her two older sisters are successful in their careers. Mia falls in love with one of her classmates who happens to be a Preacher’s kid. However, her past refuses to let her go. So, she and her new love will have to do whatever it takes to stay together.

Characters:
MIA: law school graduated. The youngest sibling of three girls…Her mother and father died when she was in her first year of college. She was in an abusive relationship with LEO. She met CHASE through Law school and they have been together ever since. She is 24 years old.
CHASE: Law Student graduate, He’s the son of a Pastor. He is strong on his Christian beliefs. He’s in love with MIA. He is 25 years old
LEO: MIA’s ex-serving time for domestic violence. He is a big-time drug dealer. He covered it up with real estate. MIA found out what he was really into and decided to leave him. He became abusive and MIA had him locked up. After serving 3 years he was released from prison. He is 26 years old
EVA: Is the second oldest sister of MIA. She is the comedian of the family. She is married to TYLER they have been married for 15 years. She is a Registered nurse. She is 32 years old
TYLER: Is a police officer. He is about justice.
SYDNEY: Is the oldest sister of MIA and EVA. She is a pediatrician with twin boys. she was married to JACKSON for 20 years and they got a divorce because of his infidelity. She is 40 years old
JACKSON: Is SYDNEY’s ex-husband. He is a police captain as well. He cheated on SYDNEY and wants her forgiveness. He is 41 years old
LONDON: Is MIA’s best friend she works at the café. She is 24 years old.

This casting notice was posted by: E.V.O.L. Productions 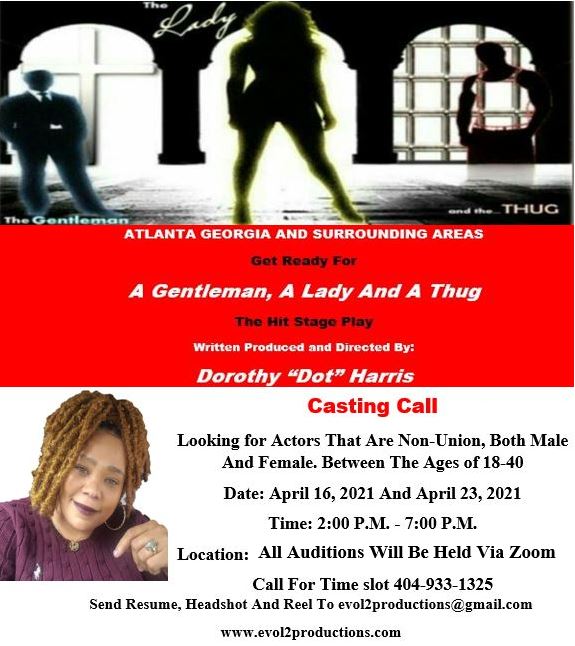